Abrasive Hygiene. How To Keep Your Abrasives Healthy

Well-timed and proper maintenance of abrasive stones, keeping the sharpener and the sharpener's workplace clean are the most important factors in a quality sharpening job. An abrasive covered with sludge residue is much less productive, and a diamond that has fallen out of the bond can "infect" softer stone, causing a "parasitic risk". All of these problems can be avoided by regular care of the main sharpening tools and an understanding of the importance of good hygiene. 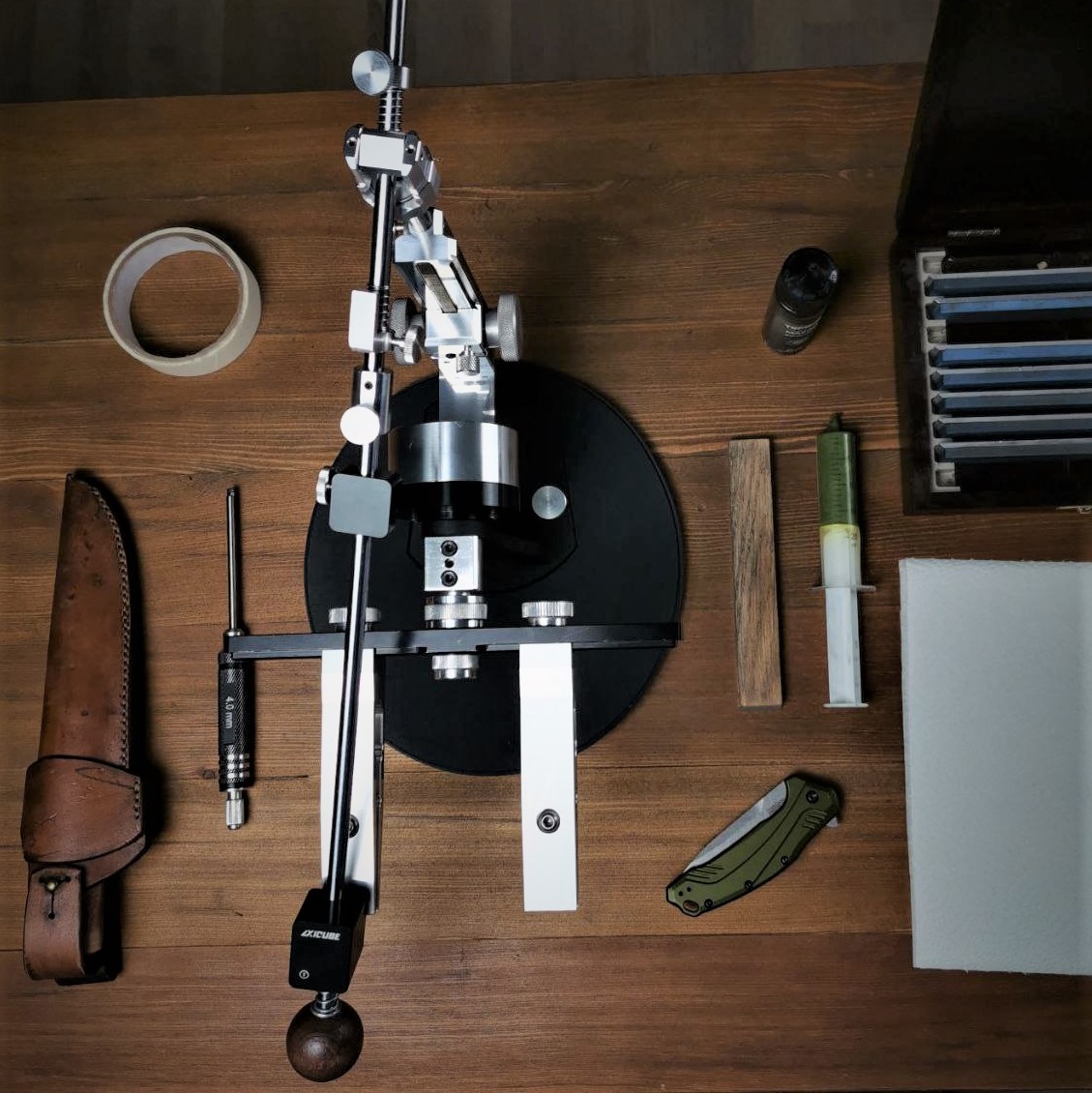 Sharpening results in the formation of so-called "sludge" on the blade, which is the residue generated by grinding on special machines. It consists of small particles of stripped metal, abrasive grit detached from the stone and residues of the lubricants used during sharpening. How often should the sludge be removed? This should be done as often as possible. Accumulated sludge can get on the surface of the bevels and from there to the inside of the clamping jaws and subsequently scratch the blades. This applies primarily to the effects of roughing abrasives, coarse silicon-carbide stones and galvanized diamond stones. Such stones lose their grit very actively, which spreads over the surface of the sharpening device and the workplace. Also, well-timed removal of the sludge prevents "contamination" of the following sharpening stones, which may have a softer bond. Hard grit can penetrate into it and become firmly fixed there. This will lead to the appearance of the so-called "parasitic mark", i.e. scratches on the secondary bevels, left by this foreign inclusion. When working with a knife, a weakened area of the cutting edge will be formed in the area of such marks, and it is there that pitting will occur, when cutting hard materials. In fact, such a mark represents a micro concentration of stresses and preventing its occurrence plays a crucial role for the sharpener. Therefore, when removing the knife from the clamps after sharpening, it is necessary to wipe them not only from the outside, but also from the inside. 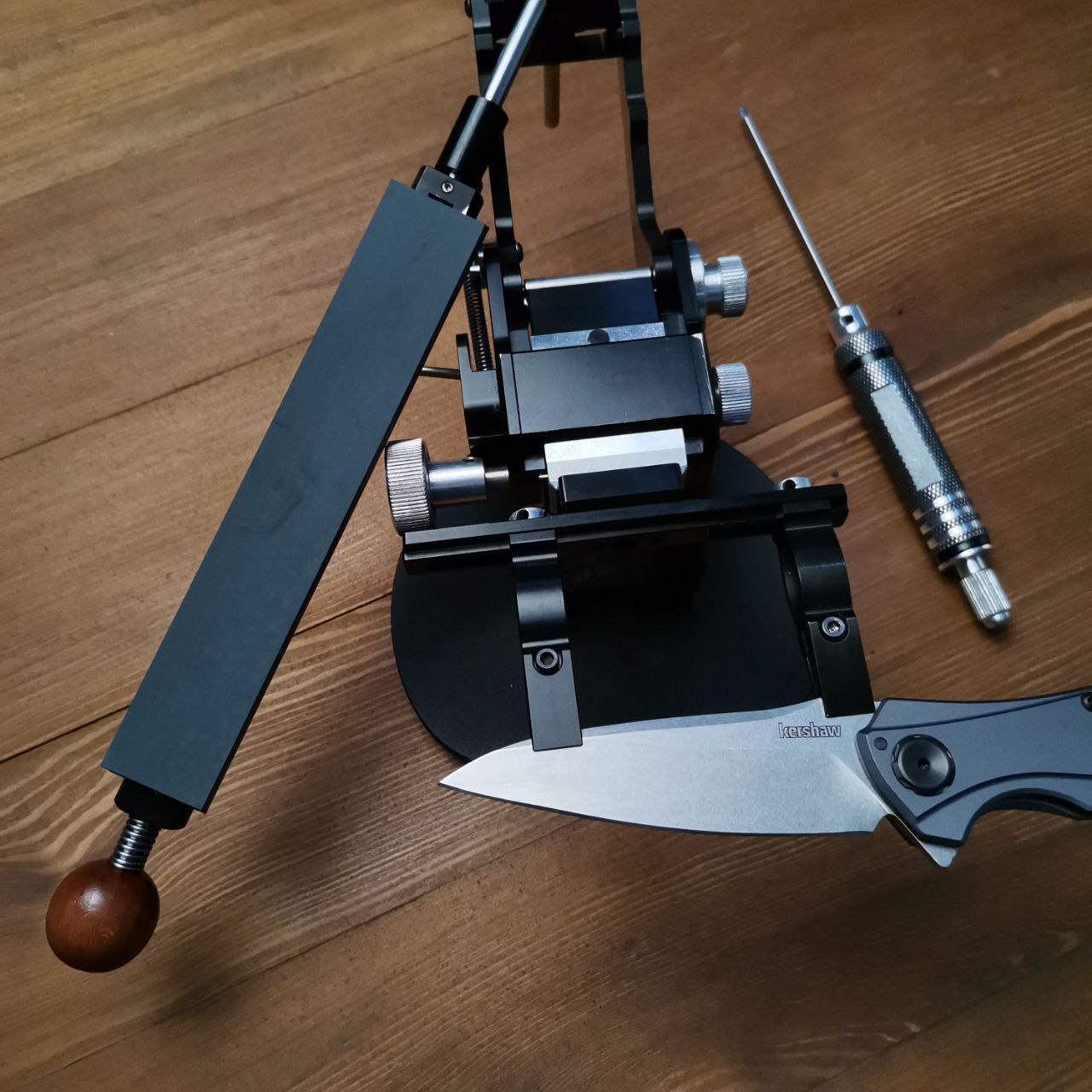 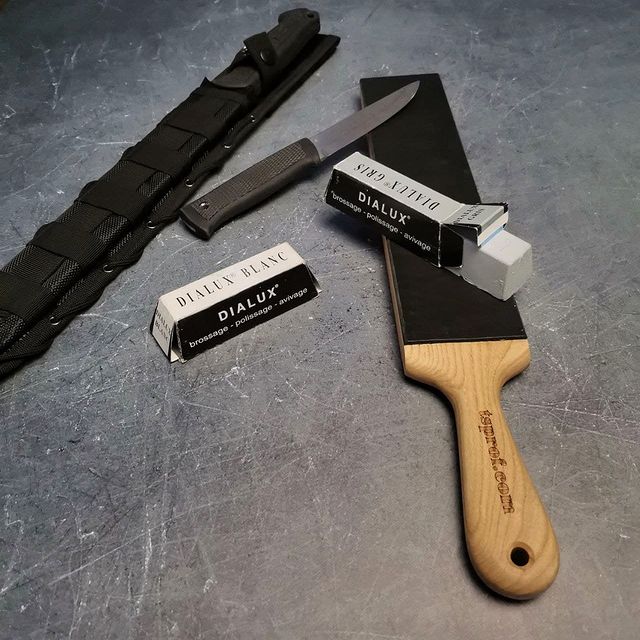 It is also important to ensure that the abrasive stones are stored in special wooden or plastic boxes or caskets to prevent contamination. There, they should be separated from each other with trays or dividers and not touch each other. It is advisable to keep coarse abrasives as far away from fine abrasives as possible, especially those in a soft bond. When carrying abrasives in special pouches and twists, it is advisable to place the abrasive stones in the same compartments to avoid contact with the grains of previous abrasives. This applies primarily to water stones not dried after work, as well as organically bonded diamond stones, especially the soft OSB bond. 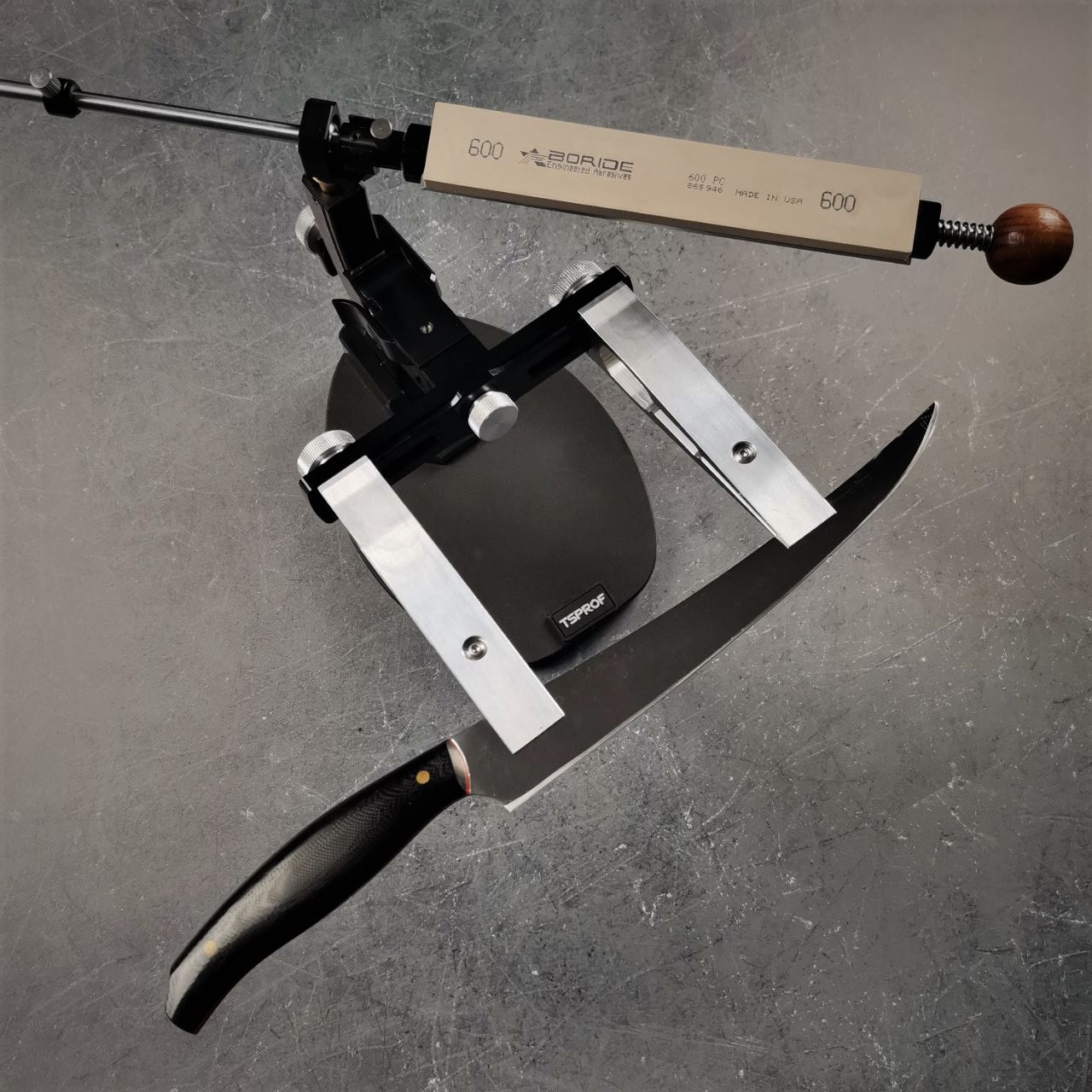 If you notice a clear sharpening mark that runs along the secondary bevel in a different direction from the rest of the abrasive mark, or leaves a more pronounced mark, then your stone may be "contaminated". A metal ruler placed on its edge perpendicular to the abrasive bar can be used for checking. In this position, it is slid across the entire surface of the stone and "bumped" against the protruding coarse grain. The search for a foreign grain requires quite thoughtful and painstaking work, but gives excellent results. 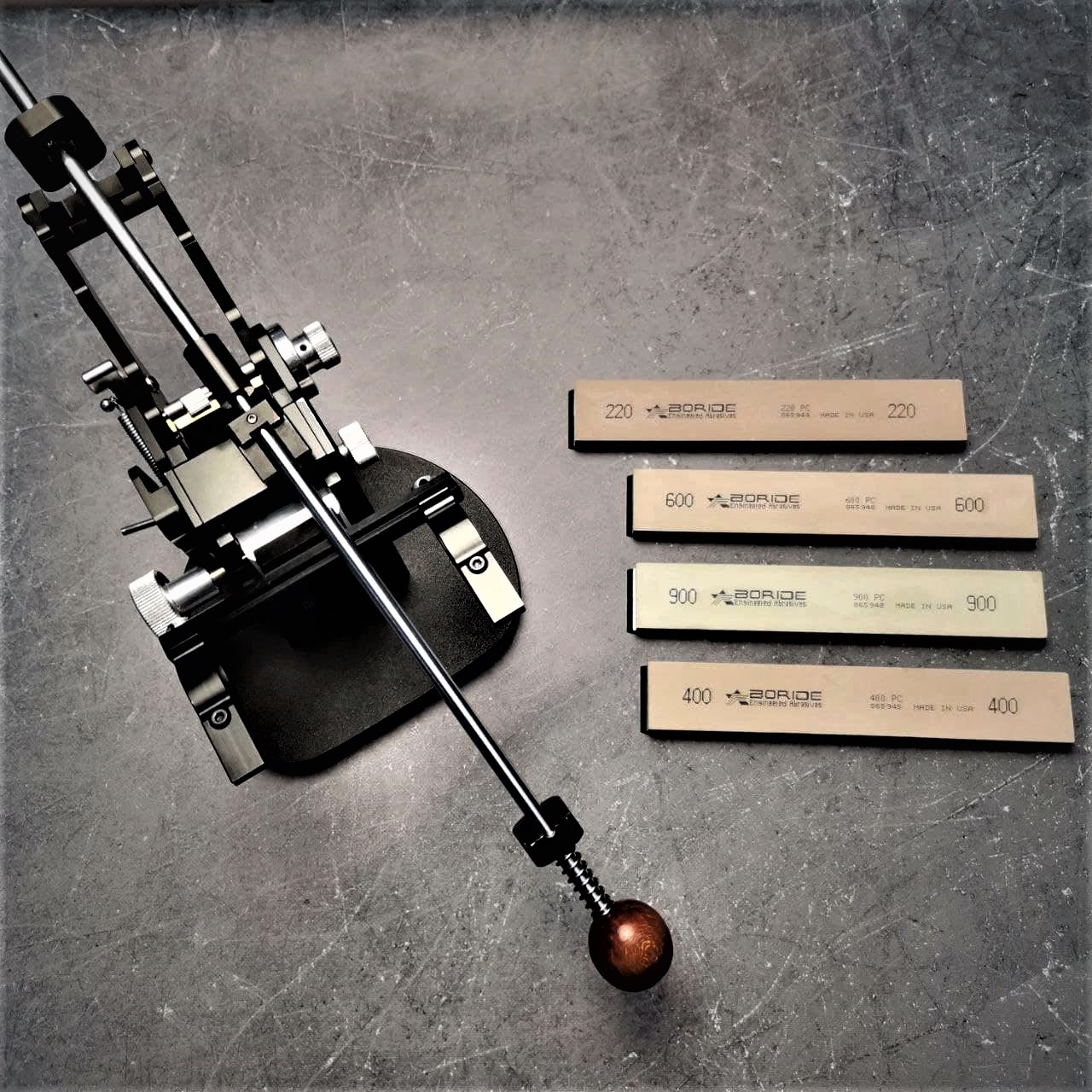 The best way to get rid of foreign matter would be to smooth out the sharpening stones on glass with silicon carbide powder. This applies to synthetic abrasives based on aluminum oxide and silicon carbide, ceramic and magnesia bonded; bakelite (phenol-formaldehyde) and vulcanite (rubber) bonded diamond stones. To level ceramic-bonded stones it is necessary to use a powder with twice the grit size of the stone. To level organic-bonded diamonds, powder of the same grit size as the stone should be used. To level magnesia-bonded aluminum oxide stones (Naniwa or Shepton stones), it is not necessary to use silicon carbide, but only its own suspension, which is released when the stone moves on the glass. 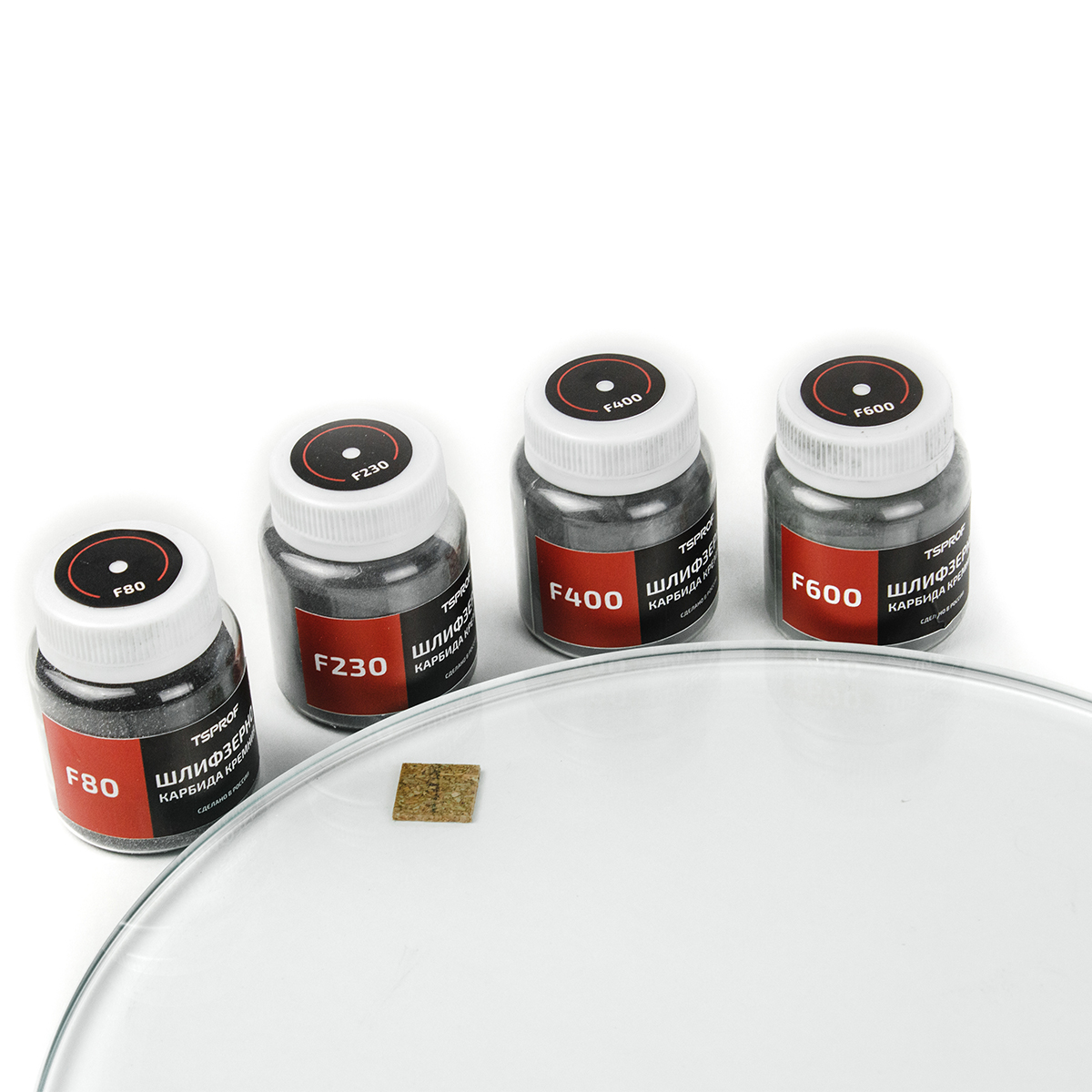 Well-timed removal of sludge and regular alignment of stones on glass with silicon carbide powder keeps sharpening equipment in order and prevents "contamination" of the abrasive stones.