The tradition of decorating knives with engraving appeared in the distant past. During the Middle Ages, almost all types of personal arms of the European elite were decorated with drawings on metal to demonstrate the high status of their owners. Engravings were mainly on the handles, tips and guards of swords, as well as on metal elements of sheaths. Later it was used on swords, rapiers, sabers, etc. And when weapons with blades became a thing of the past, the tradition moved to more compact items: daggers, hunting and folding knives. The most popular were images of various animals, plants, battle scenes, etc. However, manual engraving, despite its prestige and high value, was too slow and unproductive. And by the beginning of the XXI century it was on the verge of extinction, preserved only through the efforts of enthusiasts. Laser engraving and CNC lathes and milling machines, capable of solving the most complex tasks in the past in minimal time, have pressed the manual processing of knife handles into the super-premium segment. Nowadays, such engraving is used either on artistic products originally intended for demonstration purposes or on the most expensive custom knives. One of the most interesting techniques of modern engraving is the so-called "bulino" technique. It is believed that it appeared in the early 70s of the twentieth century. The technique refers to the chiseled engraving, in which the main role is played by the force of the engraver's hands applied to the tools. The term "bulino" comes from the name of the engraving cutting tool used in the Italian school of metal carvers. When this technique is used, the cutter has a very sharp and thin tip, and leaves a small dot when it strikes the metal. The blows are applied at different angles and with different force. The effect of an image created in this way on metal depends on the shadow play achieved by a multitude of such dots of different size and clarity. The resulting engraving is similar to an image produced with the use of a grayscale screen and is commonly referred to as a "photorealistic engraving". It has a very high definition and details often unattainable in other engraving techniques. There are three basic types of such engraving: dotted, lined and mixed, although the first two are rarely used in their pure form and "bulino" is usually mixed. 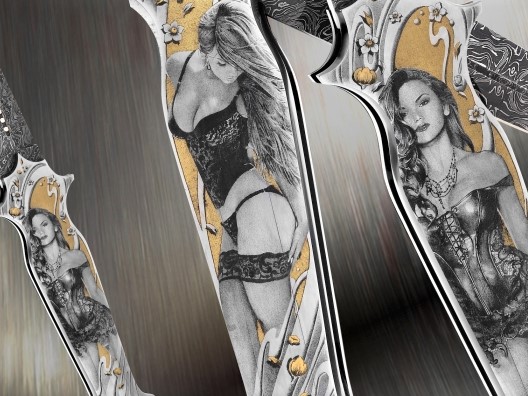 The basic set of tools necessary for an engraver to work in the technique of boulino includes: a burin (diamond-shaped cutter), a steel needle, a spittishihl (cutter for engraving the outline of a drawing), pin vise; various optical devices: a magnifying glass and a microscope; various pencils and stains (black varnishes and paints), bleachers, etc. 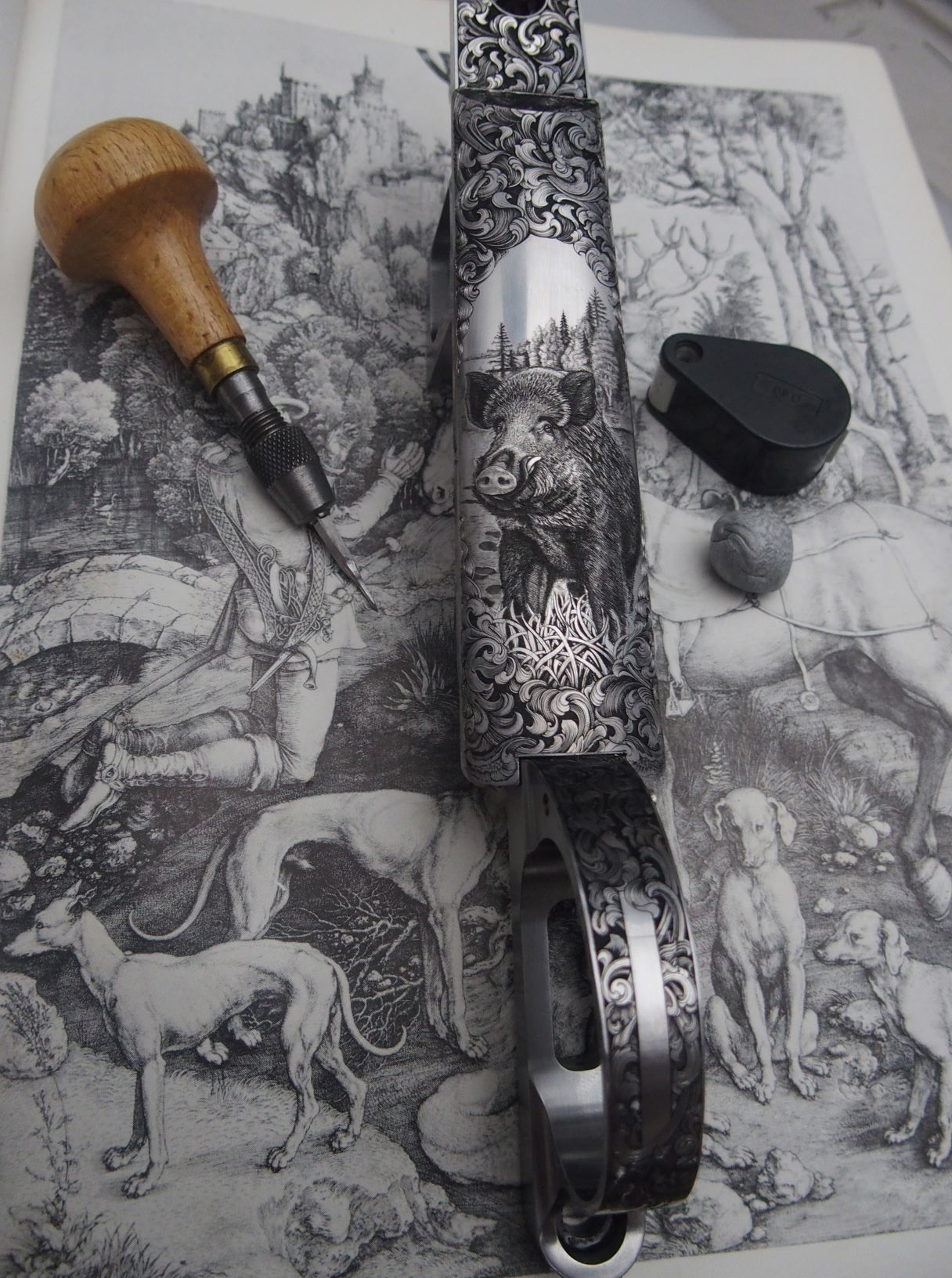 Materials for engraving can be any steel and alloys (usually with hardness up to 62 HRC, not to exceed cutter hardness), precious metals (including gold and silver-based alloys), non-ferrous metals and their alloys (melchior, copper, brass, nickel silver, aluminum, titanium). 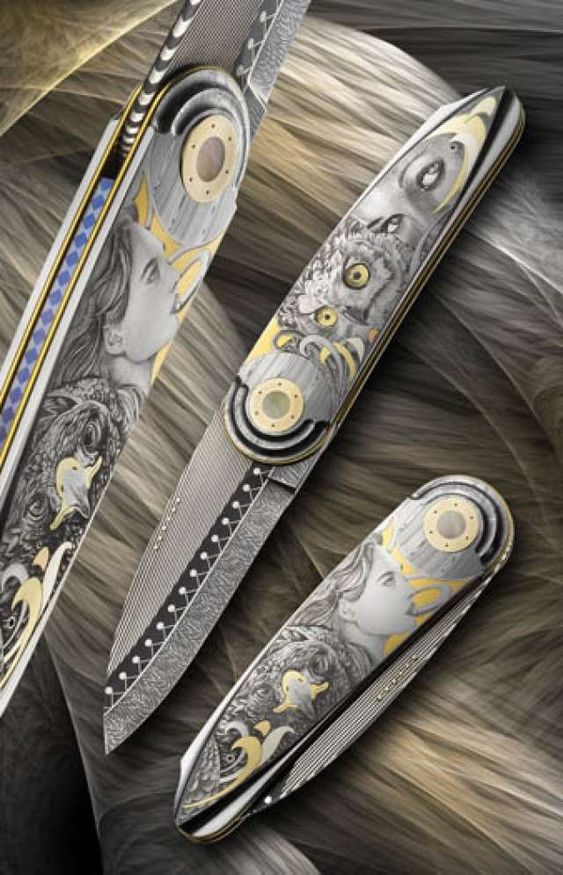 The "bulino" style engraving is applied primarily on the guard, steel bolsters and handle pads. It can also be found on the connecting screws or artistic pins that are mounted on the handle. Sometimes, on rare items, this type of engraving is applied directly to the blade. When sharpening such blades, one must be especially careful and protect the images with masking tape. The bulino technique is one of the most premium ways to decorate a modern knife, honoring a centuries-old tradition of metalwork. 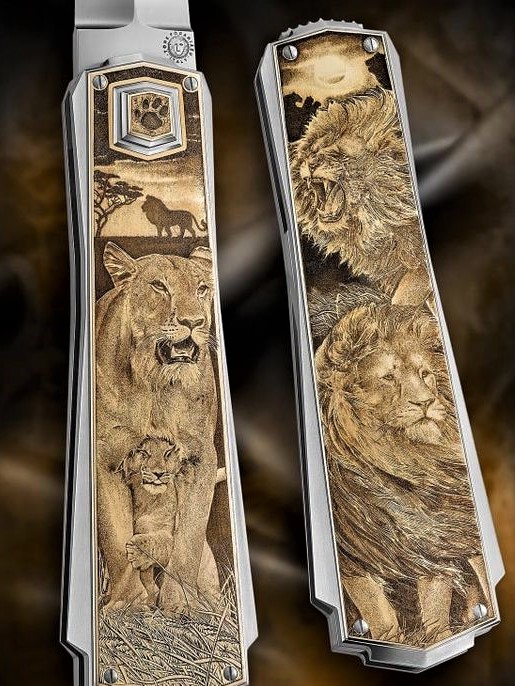