One of the most original knives of medieval Europe was the Italian double-edged cinqueda (from Italian Cinquedea meaning five fingers). The period of its popularity was quite brief and lasted no more than a century, but it left its mark on medieval weapons history and is reflected in the popular culture of today.. 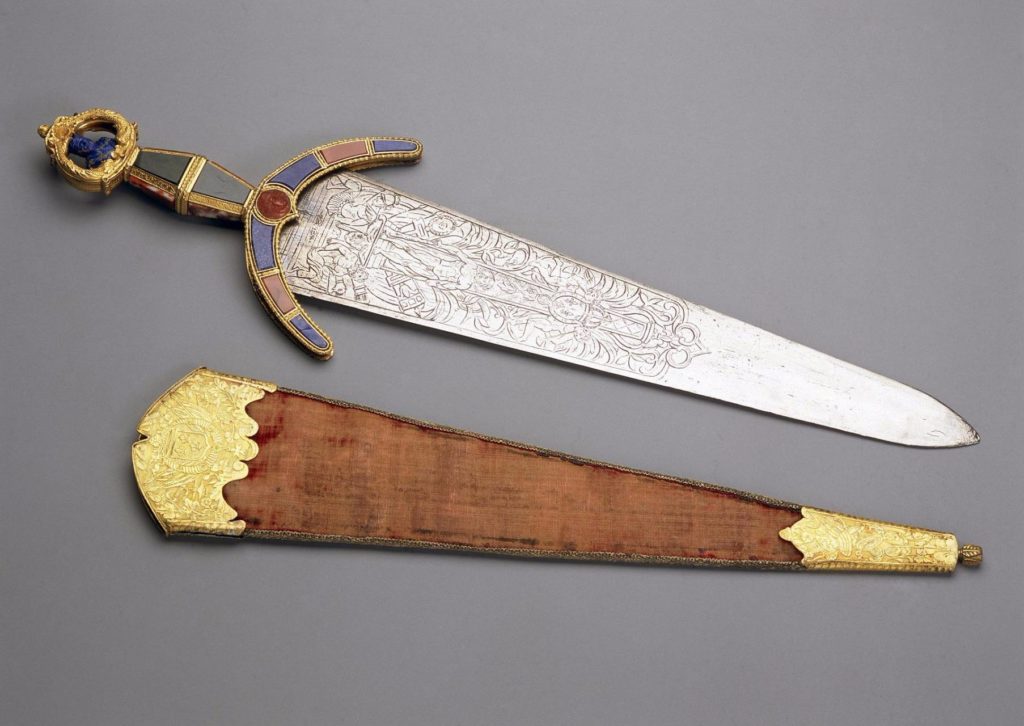 The Cinqueda was common in northern Italy from about 1450 to 1550. It had a short, almost triangular shaped blade with a semi-circular guard pointing towards the blade. Unusually wide blade, at least 8 centimeters, for a length of 40, had also significant weight and the knife acquired the characteristics of a short sword. To make the blade lighter, deep grooves resembling fingers were made on it, which gave the name to this unusual dagger. Historians believe that the creation of this knife was dictated by the fashion for Ancient Greek and Roman culture that emerged at that time in Northern Italy. These knives originally appeared in Verona as the ornaments of the local nobility and were clearly borrowed from the weapons of antiquity. They inherited their form partly from Roman swords, and to a greater extent from the ancient Roman combat dagger, the Pugio. It also had a broad base of blade and a long aggressive point, although the blade was different in shape. It had a recurve on both sides and two straight lobes in the middle. The pugio was used by Roman soldiers from the first century B.C., and a century later became a "regular" weapon of private legionnaires and junior commanders (centurions, standard-bearers, etc.). The most important quality of the dagger was its ability to work in a narrow space without a swing, both forward and backward grip. It was not suitable for fencing, in fact it was a "weapon of last chance" used at the shortest distance. 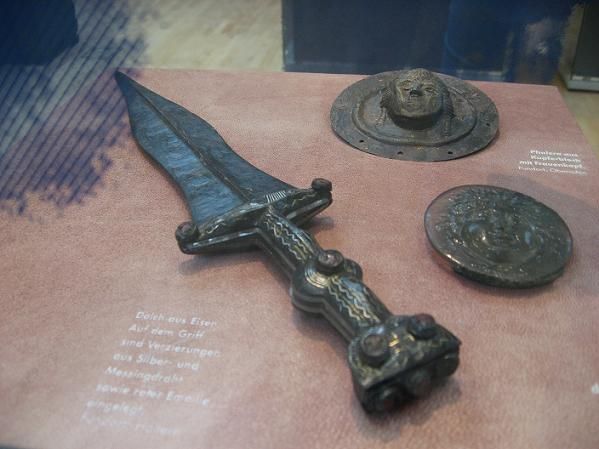 The chinkueda inherited this feature of the ancient dagger immediately becoming a weapon of self-defence. It was worn under a long cloak, fastened horizontally across the body, at the waist. Only the hilt was visible from under clothing. The knife was extracted with a swift horizontal movement slightly downwards, and it was the heavy weight that contributed to the speed of the extraction. Weapon was instantly ready for action, allowing for short stabbing blows from the bottom to the top and forward. In addition, due to its width the blade allowed cutting and slashing blows, which distinguished it from other daggers. 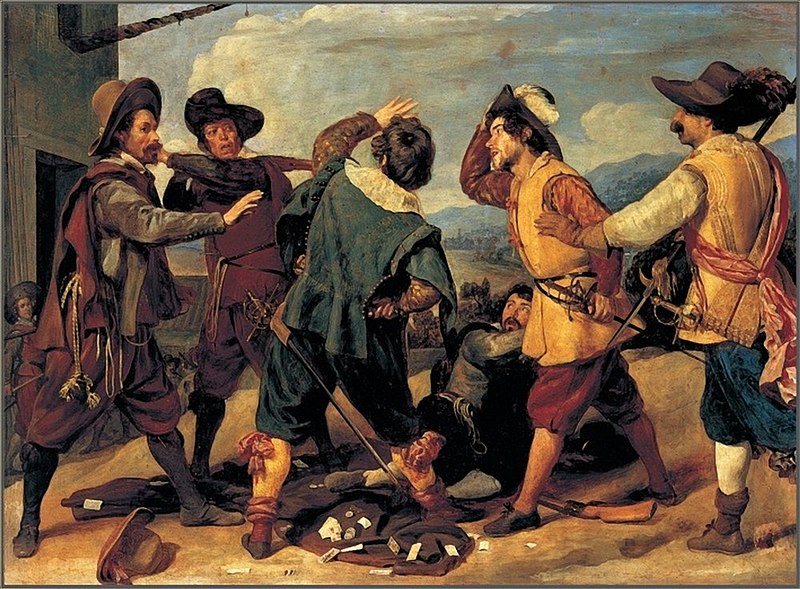 In terms of its technical characteristics, the Chinkueda occupied an intermediate position between the short sword and the long dagger. The standard length of the blade was 35-40 cm, the total length of the knife was 50-55 cm. It was made of carbon steel, had three or four broad grooves at the base of the blade, which narrowed to two at the tip, and then to one. The blades were often richly engraved and sometimes gilded.  The handles were made of wood or horn, expensive pieces were decorated with carvings and precious stones.  The finger guard was in the form of a half-moon, with the edges bent towards the tip. The knife had a double-edged grind, like a dagger, along the entire length of the blade. The sheath was made of wood, covered with leather and topped with metal linings, sometimes of precious metals. 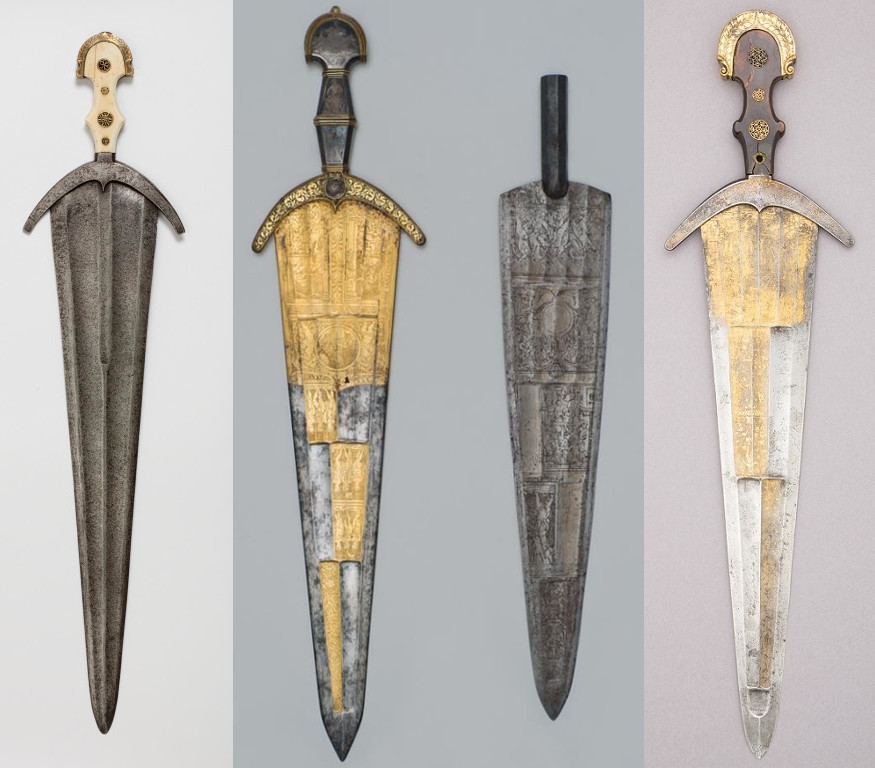 The fashion for wearing the chinqueda spread quickly enough to Florence and Venice and then across the northern border of Italy. The knife became popular in Germany, France and Spain. The Italian name did not stick, in Europe the dagger was called "ox tongue".  Gradually the tradition of carrying it spread from elite to poorer social classes and lasted there long enough. However, in the second half of the XVI century, wearing this unusual weapon went down. Aristocrats stopped wearing swords and switched to lighter, more maneuverable epees. Smaller, lighter daggers, such as the Spanish Daga, were used as auxiliary weapons. And narrow stiletto-like knives became common among the urban population. The chinqueda began to be forgotten, preserved only in weapons museums. However, modern pop culture did not let the memory of it completely disappear. In 2009, the multiplatform PC game Assassin's Creed II was released. The protagonist Ezio Auditore da Firenze, set in late fifteenth-century Florence, just couldn't do without such a popular weapon back then. And a year later, in 2010, in Assassin's Creed: Brotherhood game, the chincueda once again appears in the hands of the protagonist, but now in Rome. The success of these computer games spurred the makers of real knives to produce models such as the Cold Steel Cinquedea, which delighted fans of historical re-enactments. The legendary dagger of the Middle Ages continues to live on in our era, even if it is in a virtual reality.