Dirk: The History Of The Naval Dagger

One of the most famous types of cold weapons associated with the Navy is the dirk. This is a straight thin dagger with a faceted double-edged blade. Most often, the cross-section of the blade has a shape of rhombus, but variants with a different geometry are also forged. Nowadays, the dirk has already lost its utilitarian purpose and is intended for ceremonial formings, various festive events, and is also used as a reward weapon. It is now part of the uniform of the navies of various countries. 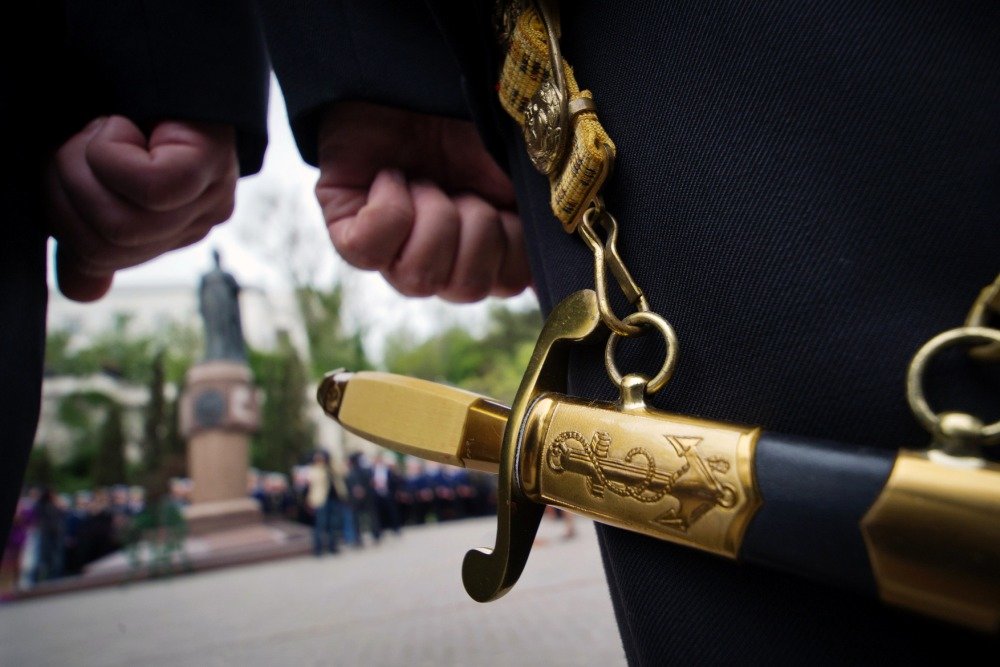 The origin of the name of this knife is not reliably known. According to one version, it appeared in medieval Poland, as one of the types of national knives, under the name "сord" (Polish kord), but in European languages there are other consonant, appropriate words: Dutch 'korte' - "short" or Spanish 'corta' - "cutter".

The dirk is a direct continuation of the thin European stiletto-type daggers, originating from the medieval "daggers of mercy". They were used to finish off a wounded knight in heavy armor, had a very thin blade with a diamond-shaped or circular geometry. After the end of the era of knight battles, such knives took a separate place in the knife culture of different countries. In particular, in Italy they became the basis for the creation of stilettos, in France various types of rapiers. Around the 16th century, from the beginning of the "Age of Discovery," the knife began to be used in the Navy as a weapon in boarding combat, initially in the form of a rather long and thin rapier. The dagger became very popular because of its ability to maneuver in the narrow spaces of ship holds. By the end of the 17th century the dirk began to lose its significance as a close combat weapon, and gradually turned into an honorable symbol of military aristocracy. It was made of the most expensive materials, decorated with engravings, figured tops and guards with inserts made of precious stones. The popularity of the dirk among sailors grew, by the end of the 18th century it was at its peak and led to its official acceptance for service. This first happened in the British Navy, around 1800. The knife received a standardized blade of 41 cm length and a wooden hilt covered with shark skin. It became a prize weapon, a symbol of prestige and honor, along with the officer's saber. A little later a similar tradition of awarding the dirk was adopted in the navies of other countries, and later in the civilian departments of various states. 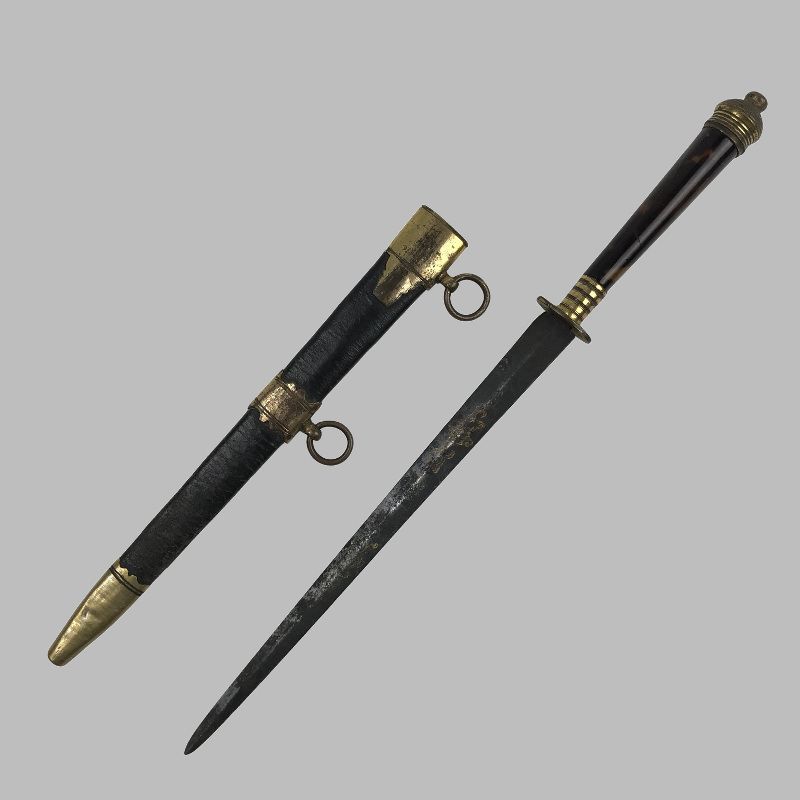 The first standard Russian naval dirk appeared in 1803. Its wearing became obligatory for junior officers. The dirk had a dagger-shaped blade 30 cm long with an ivory hilt. Later, in the 19th century, the tradition of wearing a naval dagger extended to representatives of civil ministries and departments: telegraphers, letter carriers, merchant fleet sailors, foresters, etc.

During the Soviet period the dirk became an element of the parade uniform of officers and midshipmen (warrant officers) of the Navy. Since 1919 it was adopted for the Red Army command staff. Right up to 1954 it was also worn by the employees of the civil departments: employees of the railroads, prosecutors, air force officers.  From 1958 onwards, the dirk has been worn during parades and festive events, and on other solemn occasions. 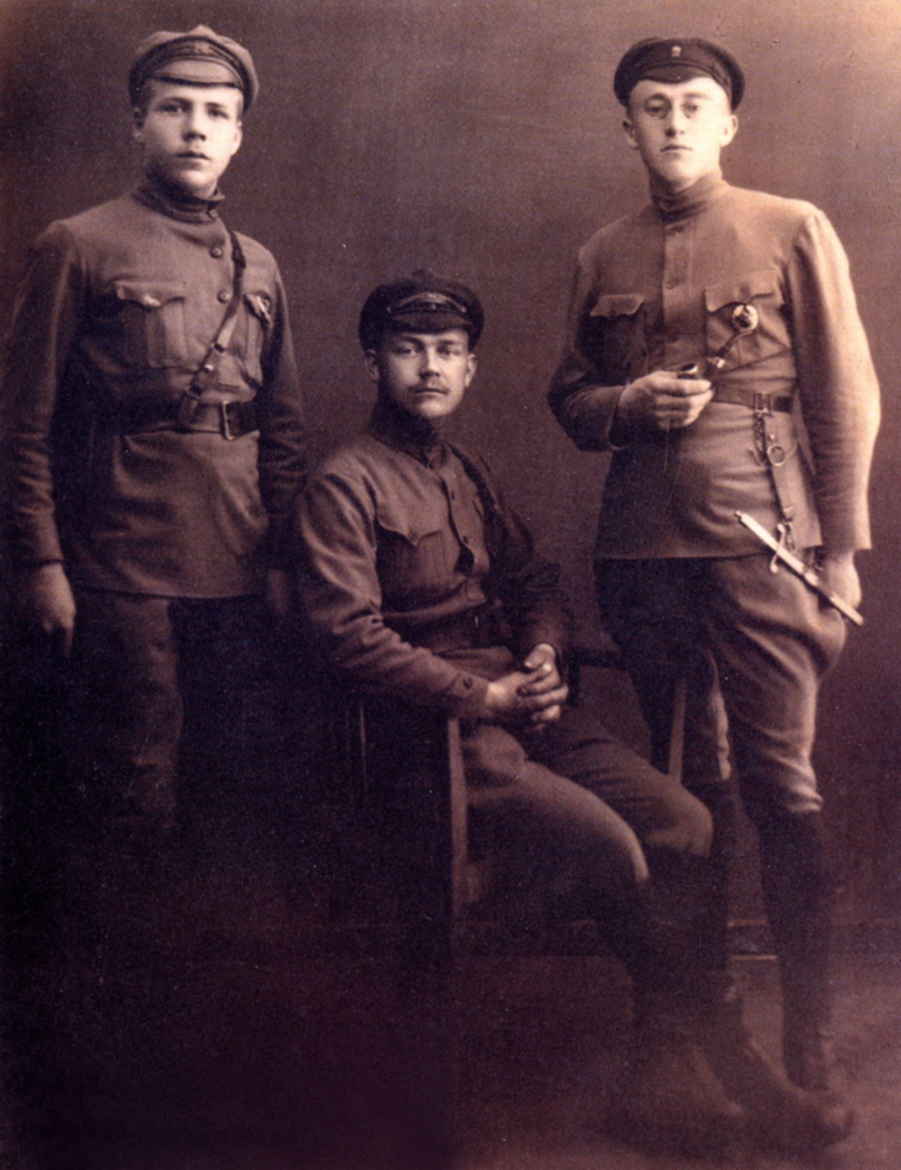 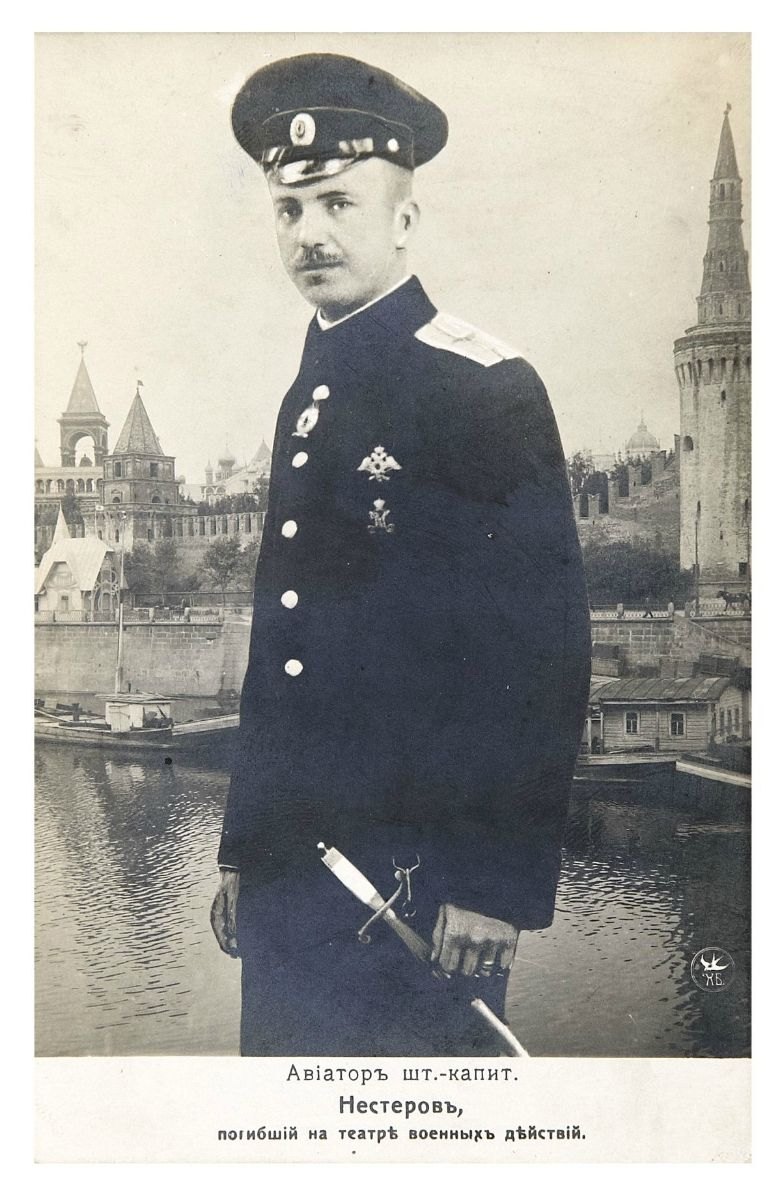 Soviet dirks had standard dimensions of 30-50 cm (12"-20" inches) overall length. Blades were made of carbon steel, particularly of 40X10C2M (EI-107), with hardness of 50-55 HRC and had dagger-shaped blade with diamond-shaped geometry. To protect from corrosion they were coated with nickel or chrome. The handle was made of plastic and had a barrel-like shape with bevels.  The guard was straight, flat, with rounded ends turned in different directions. The scabbards were made of wood, covered with black leather, with a brass head and rims, on which the rings for the harness straps were fastened. In different years the dirks were decorated with coats of arms, and the scabbards had images of ships. The most expensive copies were decorated with etching on the blade in the form of intertwined plant stems. Dirks were worn on belts or special belts. All dirks of the USSR times were officially produced by one manufacturer, the "Instrumental-Metallurgical Plant" from the city of Zlatoust, now the "Zlatoust Metallurgical Plant". 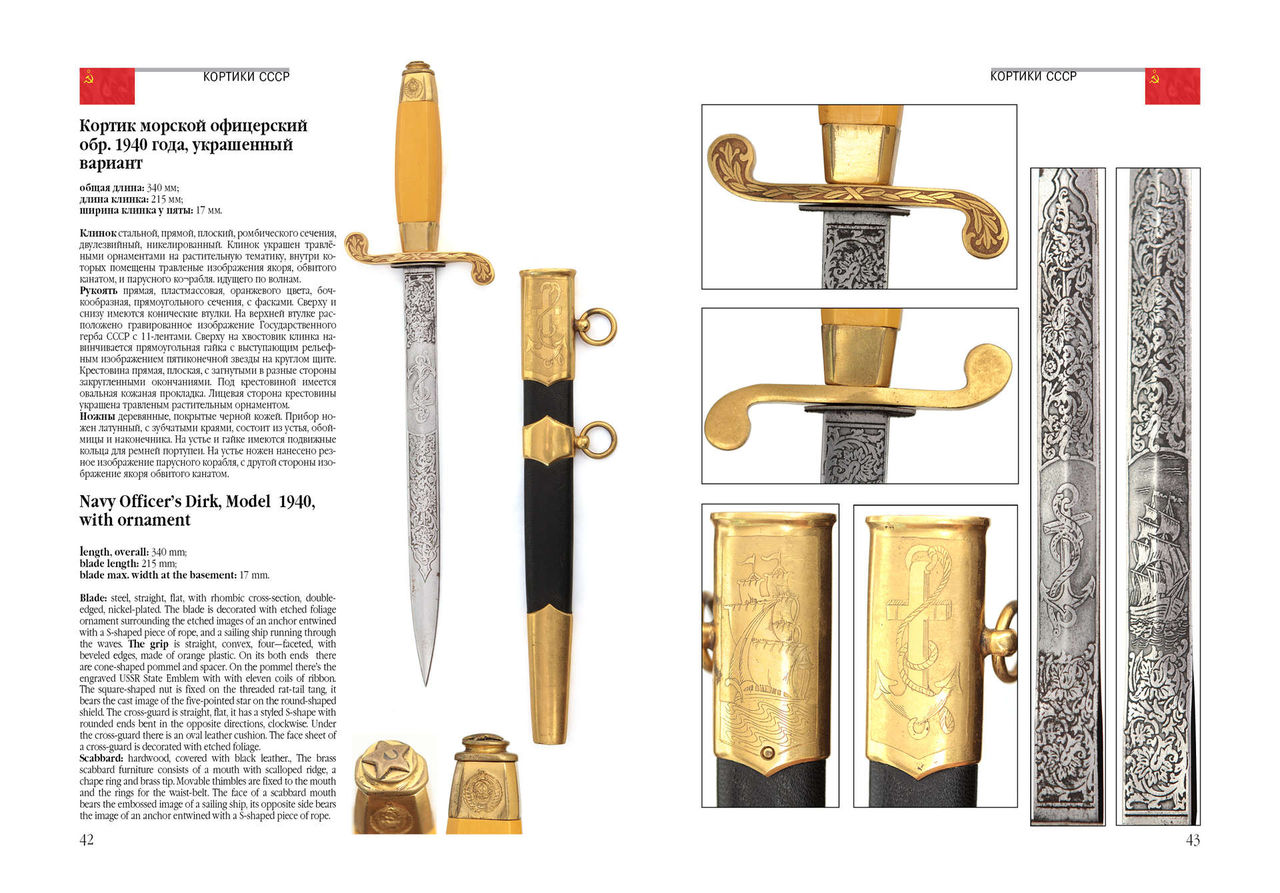 In the Russian army, the standards of dirks and their carrying were borrowed from the practice of the USSR. According to the 1996 law «About Weapons», a standard officer's dirk falls under the definition of a cold weapon. According to the law, it was allowed to be carried only by servicemen with parade uniform or those discharged from military service with the right to wear military uniform and only with a special permit. However, in November 2021, in the new edition of the law, this clause was abolished. As indicated in the amendments: "Dirks received by Russian citizens dismissed from the armed forces with the right to wear military uniforms will not be subject to registration in Rosgvardiya (Federal National Guard Troops Service) and will not require a corresponding permit to keep and bear arms. In addition to festive symbols, dirks are also an important attribute of the funeral of military sailors in Russia. According to the Statute of the garrison and guard services of the Armed Forces of the Russian Federation, during funerals: «The coffin lid is covered with the cloth of the State flag of the Russian Federation. A headdress is attached to the lid of the coffin, and for the burial of officers (midshipmen) of the Navy, in addition - a crossed dirk and scabbard. Before closing the coffin lid, the dirk and scabbard are removed from the coffin lid and the Russian Federation national flag is rolled up and given to the relatives (friends) of the deceased.» 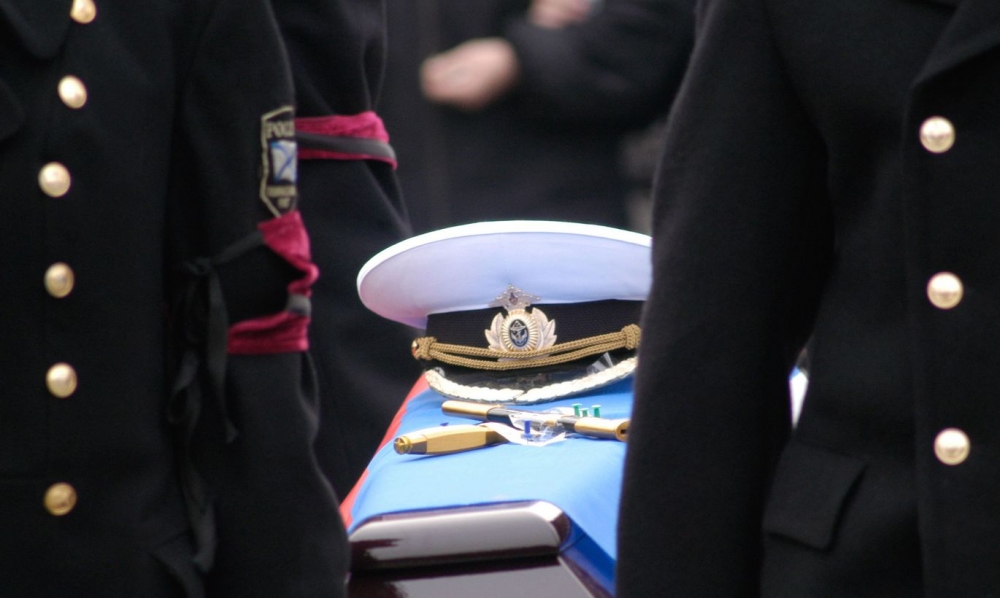 Despite the fact that the dirk lost its significance as a military weapon several centuries ago, it still remains one of the most recognizable and popular military symbols. And it has firmly entered the mass culture as a sign of military prestige.