How To Remove The Burr

One of the main problems that can be encountered when sharpening knives is the removal of a stubborn burr. A burr forms during each sharpening process as a natural result of the metal being removed by an abrasive process, through plastic deformation and pulling of the metal onto the cutting edge. Structurally, it is a raised edge of steel material that has not separated from the processed surface. When sharpening with several stones, with a successive reduction in their grit size, the burr separates from the cutting edge, creating the originally required quality of the knife - sharpness. However, in the case of high ductility of the steel due to its original characteristics or irregularities in heat treatment, the burr becomes highly resistant. The higher the hardness of the abrasive grit and the lower the hardness of the steel, the more burr will form. Relatively soft sharpening stones, e.g. made of silicon carbide, work much more effectively with soft steel than diamond stones with an extreme hardness of grain, due to the formation of a large amount of slurry. 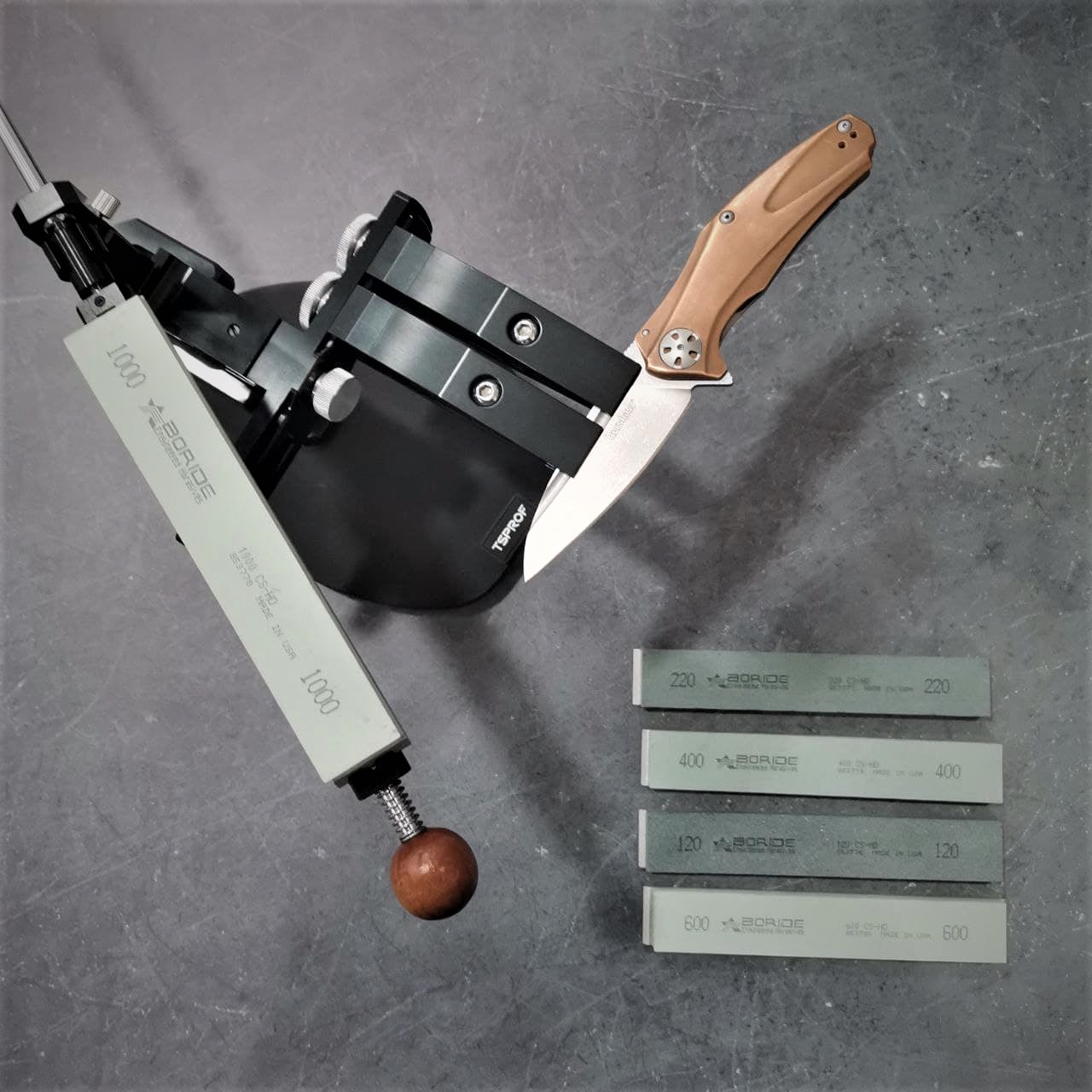 When a stable burr is formed, the metal forms thin plates of different sizes and shapes which are clearly visible under the microscope on the surface of the cutting edge. They resemble a foil that "hangs" at different angles, often twisting into spirals. As the burr itself has a very thin structure, left on the knife it can act like an aggressive microsaw. When it comes into contact with a soft material, it is able to cut it independently and the knife even exhibits a certain "cutting aggressiveness" and may appear sharp. However, when in contact with hard material, burr begins to crumple into a thicker lump and the knife stops cutting. Alternatively, it may simply fall away from the surface of the cutting edge, leaving in its place an unsharpened area with no cutting properties. Thus, a knife that looks sharpened rapidly loses its sharpness. The removal of a stable burr is the main task when sharpening a knife, and methods of dealing with it should be in the handbook of every sharpener. 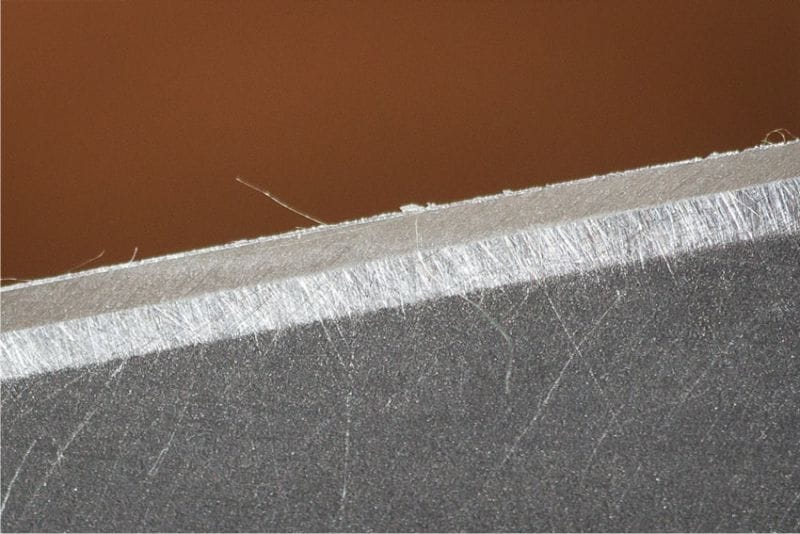 There are several ways to remove a burr:

1. The classic blade finishing after a basic sharpening operation by moving from the cutting edge to the spine. It is carried out with a finishing stone, e.g. a 1200 grit aluminium oxide stone or diamond (or CBN) stones with a 7/5 or 5/3 grit. As a result of the multiple motions with a constant change of sides, the burr falls away from the cutting edge. During finishing operations minimal abrasive pressure should be applied to the cutting edge and the final movements should be done without any pressure at all. This method is effective for rather "dry" and hard steels (over 60 HRC). But even on such steels, experienced sharpeners recommend making a few "test" movements on the leather. These are necessary to remove residual, the smallest and almost imperceptible burr. Knife honing boards with thick, dense leather (usually croupon) are most often used for this purpose. It is very important that the leather is on a firm base and does not bend. The movement with the blade resembles finishing motions is performed with minimal pressure.

2. The second method is suitable for deburring knives made of soft steels or hard but ductile steels (e.g. forged powder steels). It involves loosening and deburring with soft and sufficiently abrasive materials. If the knife steel is clearly prone to deburring, deburring should be started at an early stage in the sharpening process. After roughing the cutting edge, a wooden block made of sufficiently hard wood is used. Jute or hemp rope, felt, cardboard or wine cork can be used for the same purpose. This method of deburring demonstrates a fairly high degree of effectiveness, for main sharpening, but it is not effective at the fine finishing stages and it is necessary to switch back to the honing board described in the first method. 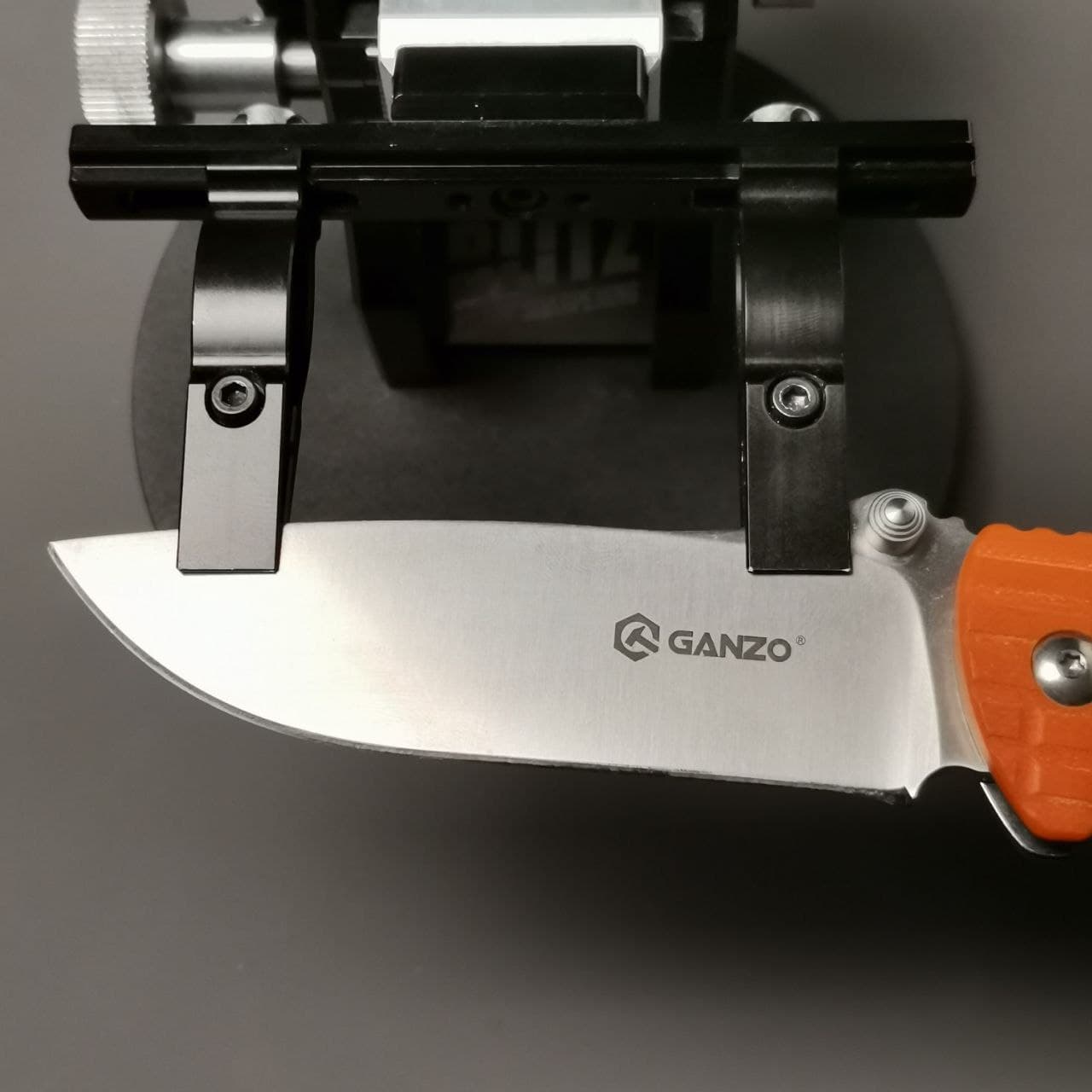 3. An effective way to get rid of burr is to create a micro-bevel, which is the formation of an additional bevel with a larger angle on the cutting edge that has already been created at a certain angle. Most often, a micro-bevel angle of 40 (20 per side) degrees is created with a secondary bevel angle of 30 (15 per side) degrees. Frequently, even quite complex and ductile burrs can be removed by creating such a micro bevel. It is created with hard natural stones, primarily Arkansas Black, Arkansas Translucent or technical jasper. In addition to deburring, creating a micro-bevel leads to a hardening of the cutting edge of steels with large carbides (X12MF, D2, etc.) which are quite dry and prone to pitting. 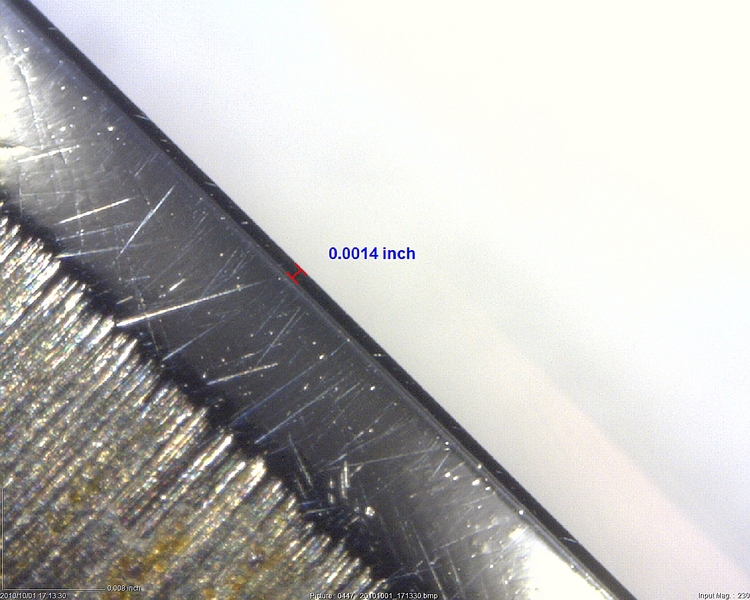 The ability of the sharpener to remove a stubborn burr is one of the most important qualities and characterises his skill. Like all other skills for a high-quality sharpening - this one is formed through individual experience and thoughtful regular work practice.