Golok — is a Indonesian national knife, common in the Pacific islands of Sumatra, Java, Sulawesi, and the Azores and Moluccas. In the past it was used as the main weapon of the local population, and in modern times it has become a farming tool. 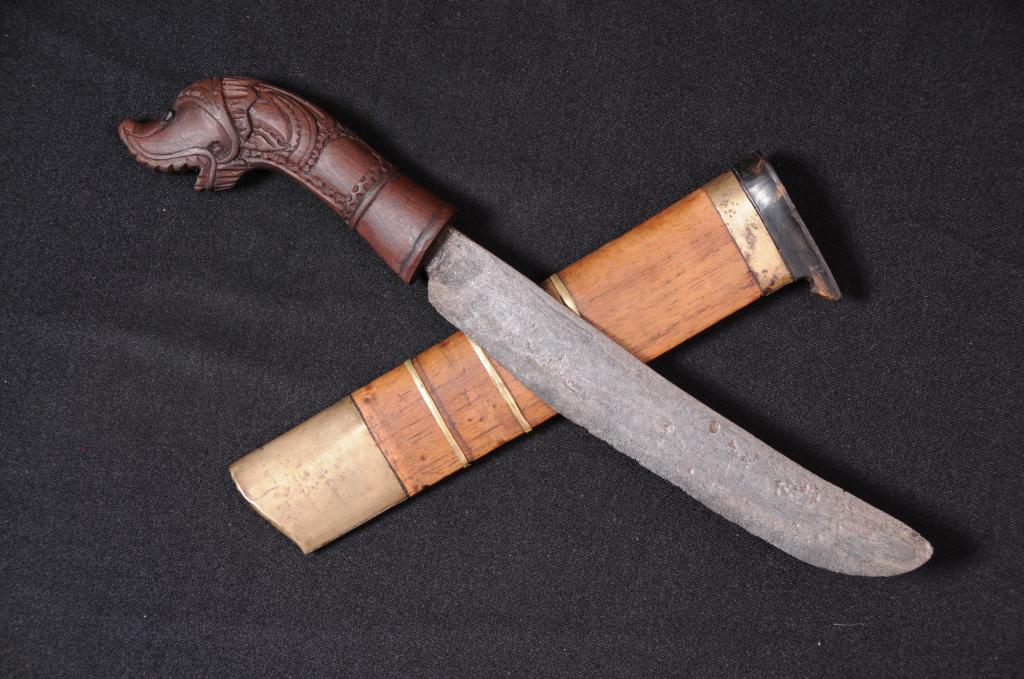 Golok has a long history and is mentioned in 17th century written sources, notably the seminal historical text Sejarah Melayu (1612), describing the origin, evolution and decline of the Great Malay Maritime Empire. And also Hikayat Hang Tuah (1700), a local epic about several warrior friends operating during the Malacca Sultanate in the 15th century. Golok has several varieties, depending on the places of production: Sundanese, Javanese, Malay, etc.
In total, there are more than 20 known golok models, which differ considerably from each other in their technical characteristics. Some of them belong to cult objects that were used for various local religious ceremonies. In particular, the golok, enchanted by shamans, was used as protection against fire, sorcery, and natural disasters. Nowadays, one of the modern centres of traditional golok production is the town of Sukabumi on the island of Java. Knives of various types and sizes are handcrafted there and blades are forged using traditional techniques. 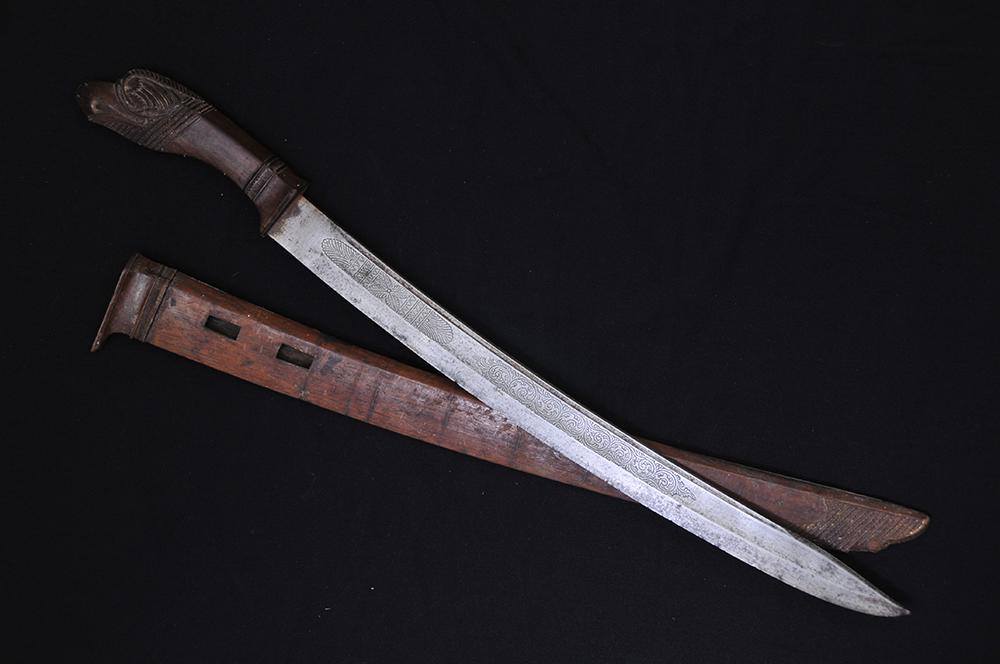 The design of the golok is somewhat similar to the bolo knife found in the neighbouring Malayan archipelago, the Philippines. However, it has a slightly different blade shape and smaller dimensions. The length of the golok blade is on average 20-45 cm and the thickness of the blade is about 4-5 mm. The weight of the blade is usually from 500 grams to 1 kilogram. The blade has a single-sided grind and has a wide handle belly often without a pronounced tip. Towards the handle it narrows and this gives the blade a somewhat 'scimitar-like' shape with a strong curve, although there are some knives with a straight shape. The balance of the blade is shifted towards the centre of the blade, allowing effective cutting of raw, viscous wood. Blades can feature both curved and convex secondary bevels. Like any other traditional knives, goloks were made from the simplest carbon steel, the same as scythes, sickles and other farming tools. The handle was made of hardwood or animal horns, most often by a hidden-tang method. It could be covered with rough leather on top. It has a curved shape with a pronounced tip - the " signature" of the golok. The most expensive knives belonging to the nobles had a handle of deer horn covered with a silver alloy with various metal designs. The sheath was made of wood, often with inserts of water buffalo horn, less often of thick, solid leather. 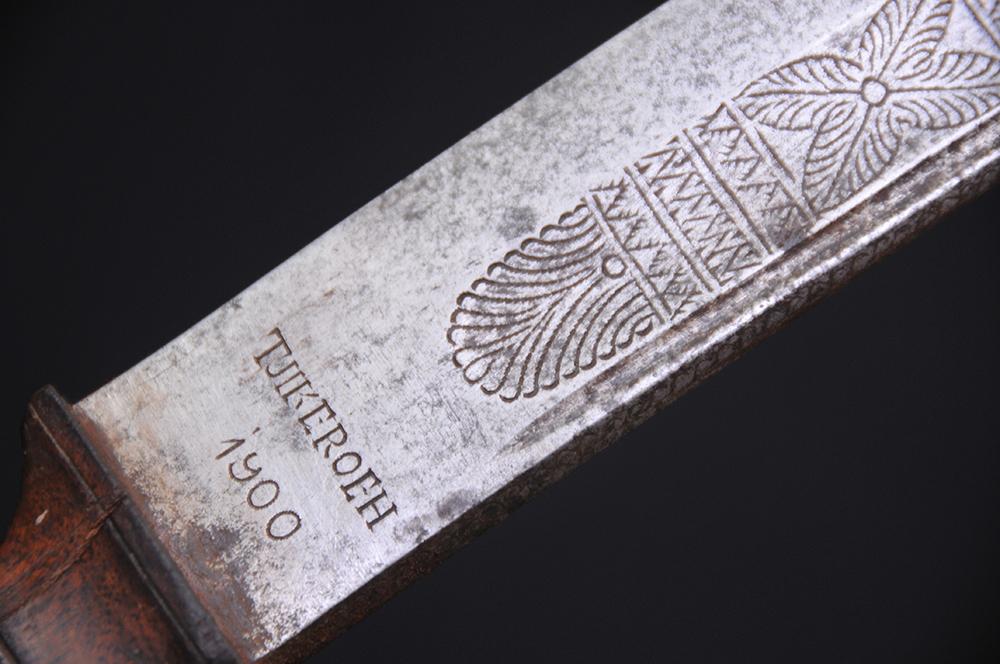 Originally, the golok was the main weapon of the Indonesian man and there was a tradition of carrying it daily. In the 20th century, this led to the knife becoming the main instrument of violent crime in the region. And by the early 1980s, the tradition had lost its relevance as the police began to confiscate any edged weapons carried openly. In the same period, the knife finally moved into the category of a household tool. Like the Latin American machete, it can be used for a variety of tasks such as chopping wood, clearing jungle paths, cutting foodstuffs, etc. In addition to this, the golok continues to be an essential attribute of Indonesian traditional martial arts, including the mainstream pencak silat.

When the British Army established the first Special Air Service (SAS) in the 1950s, the Golok became the basic survival tool of the British Special Forces. The "Golok No 2-01" was made from a single sheet of steel (full-tang method), with wooden grip pads. Regular Golok blade was 275mm long, with overall length of 450mm. Scabbard with belt clip was made from canvas. This variant of ethnic knife has passed a long way of use in different regions of the world, and has demonstrated its effectiveness. Various publications, films and books on special forces have made it popular all over the world. Such fame has encouraged knife manufacturers specialising in 'survival knives' to pay attention to this example of traditional Indonesian culture. Modern versions of the golok are made from a simple carbon steel that can withstand heavy cutting loads. The most common type is the American steel 1075 and its equivalents. The steel is highly impact resistant and easy to sharpen, but rusts badly. Handles for these knives are made of wood, plastics and polymeric materials: Kraton, Glassfilled, Elastopolymer Forprene etc. The sheaths are made from both leather and nylon, particularly Cordura and Ballistic Nylon. 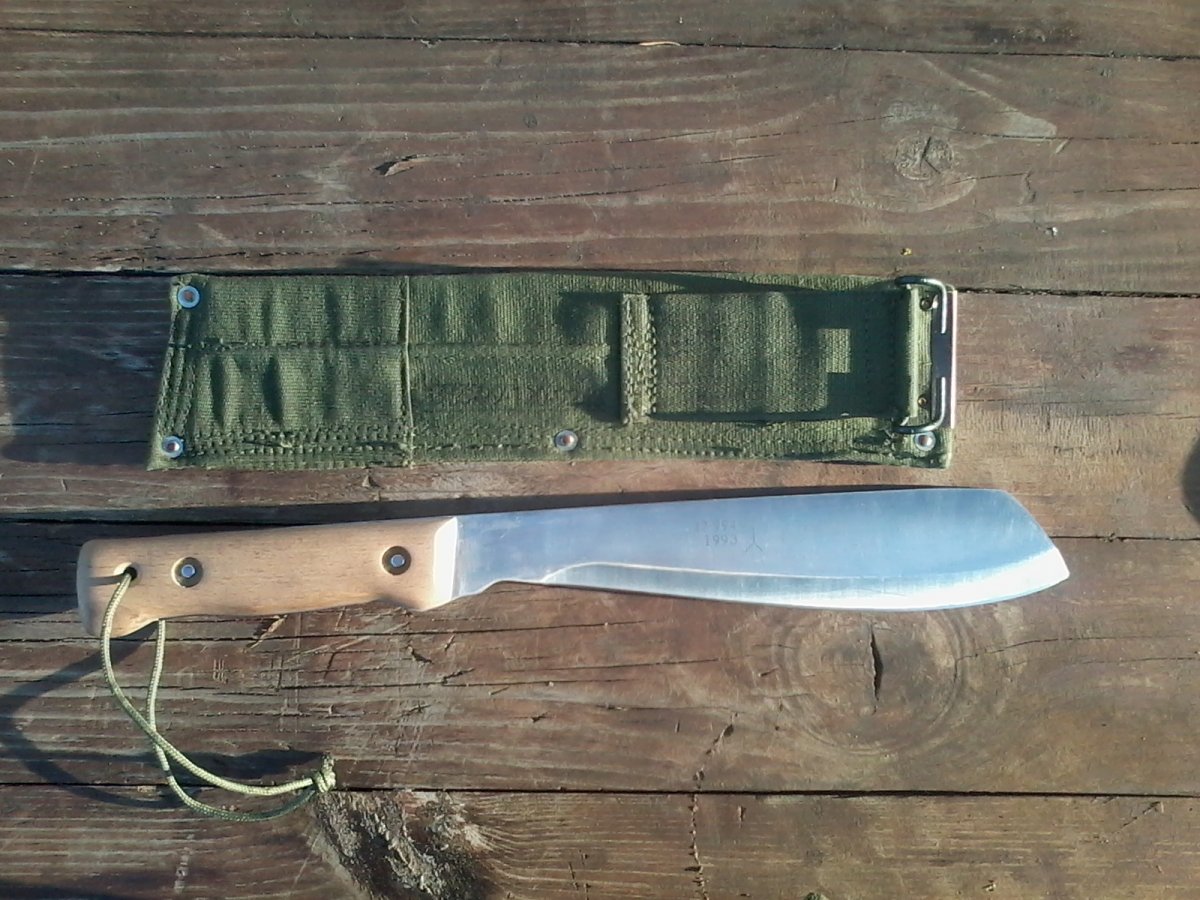 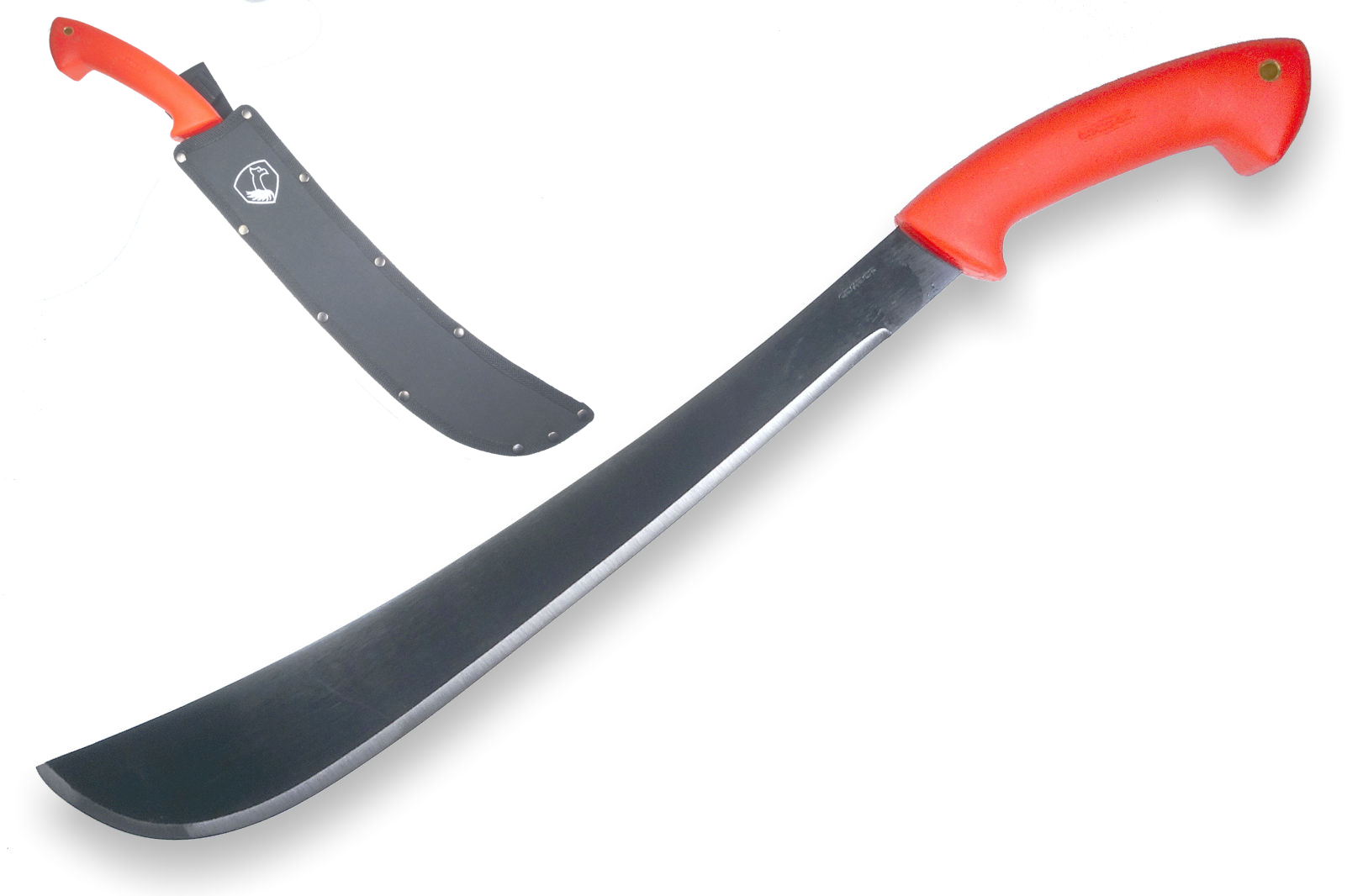 Sharpening golok knives requires a sufficiently large sharpening system in which a knife with a blade length of up to 50 cm can be securely clamped. The TSPROF K03 is the right sharpening system for this purpose. Both the traditional golok and the modern versions have carbon steel blades of low hardness between 54-56 HRC, so ceramic-bonded abrasives will be suitable for sharpening them. These abrasives are made of silicon carbide and aluminum oxide. It is also important to note that it is advisable to work with these steels with oil, because they rust very badly when using wet sharpening stones. Diamond and CBN sharpening stones made with galvanic and metal (copper-tin) bonds are also suitable for sharpening goloks. Polishing the blade is not necessary for Golok type of knives. 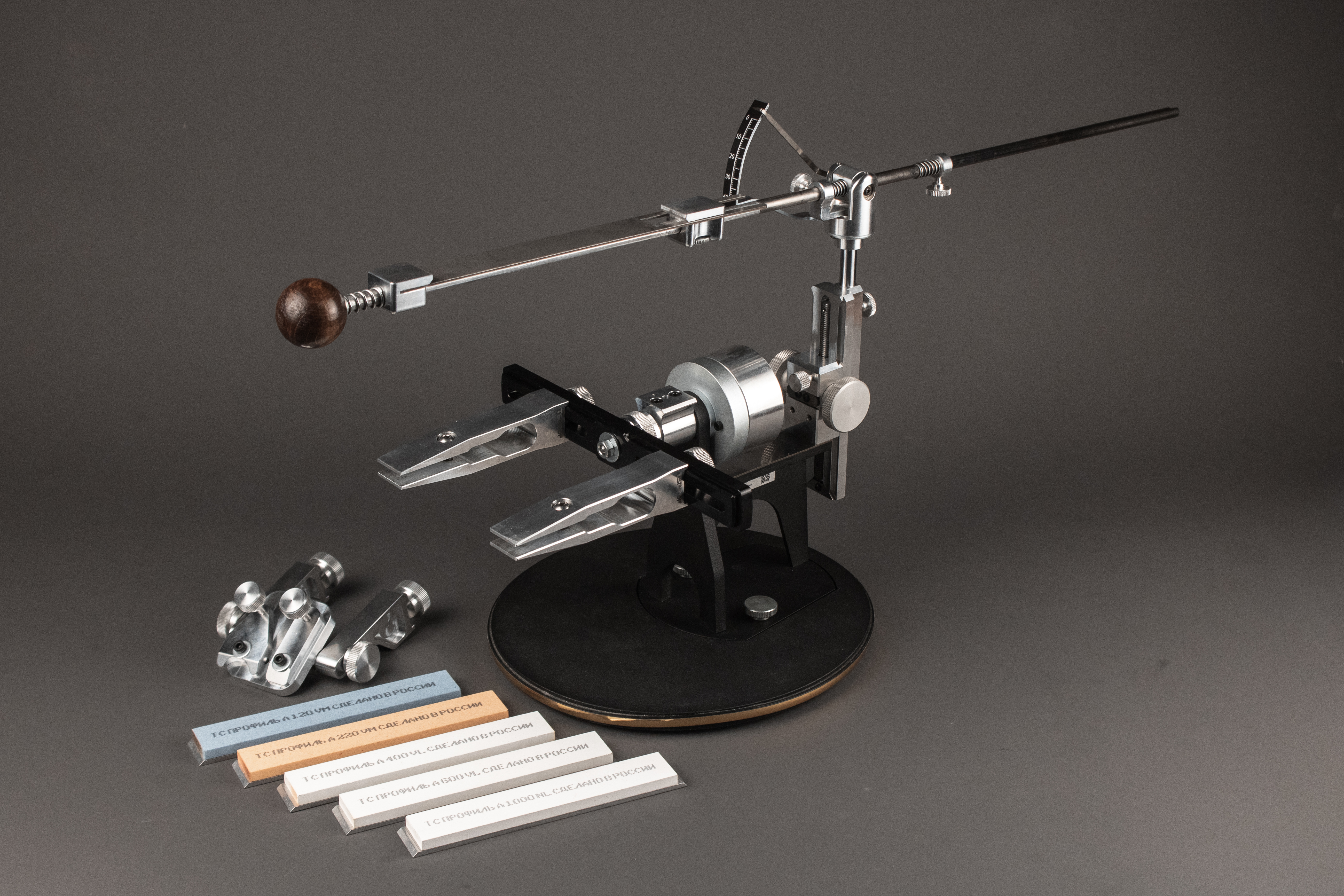