The nagura sharpening stone is probably the most widely known natural japanese abrasive stone in the world. It has gained its popularity due to its main property of being able to put a great suspension on many natural stones and help them reach their maximum working potential and efficiency. Today, the stone has become a legend and a symbol of quality hand sharpening.

Nagura stone (Nagura 名倉) is mined near Mikawa Bay in Aichi Prefecture, Honshu Island, Japan. Mikawa Bay is a semi-enclosed bay on the Pacific coast in the central part of the island. The Yahagi and Toyo rivers flow into the bay. The hilly plains surrounding the bay are covered with Pleistocene terraces, with occasional outcrops of Miocene sedimentary rocks. And the local Haju and Mikawa mountains are composed of Mesozoic metamorphic rocks and granite. 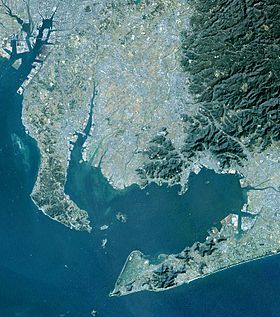 Nagura consists of volcanic tuff, an igneous rock formed by the precipitation of debris from ancient volcanic eruptions. The loose debris material at the eruption site was subjected to compaction and cementation by decomposition of ash particles under the influence of hot volcanic solutions, as well as by sintering and welding the debris together. The rock is formed of chaotically arranged fragments of solidified ash and minerals, glass, pumice, and sand. Rough clastic areas predominate in zones relatively close to the eruption center, and fine and thin clastic areas at some distance from it. The tuff has a clastic structure, with coarse layers and a heterogeneous texture. The main substance of tuff is silicon oxide. The grain size of this rock varies widely, with volcanic sand particles usually reaching 0.1-2 mm and ash particles less than 0.1 mm. The shape of the debris may be rounded (volcanic bombs), sharp-angled or shaped. Volcanic tuff is a soft and porous rock, with different densities and colors. It can be red, pink, purple, brown, orange, less often gray and black. One of the most valuable qualities of tuff has always been considered the ease of processing, it could be cut into even blocks without losing shape and was often used in construction. 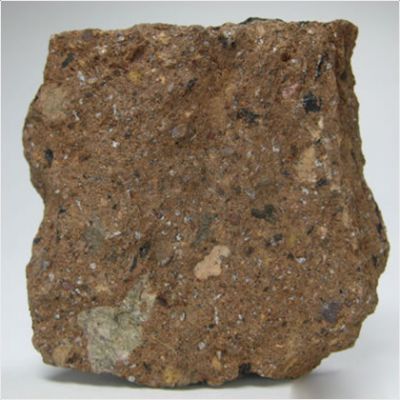 According to Japanese sources, the original nagura is mined in Mount Miwamura's 12 layers and only in the Junmikawashiro quarry. The mined stones differ in their layering, which affects the density of the mineral's structure, size, and uniformity of its grains in the rock. They also vary in color and are divided into entirely white and striped. The original stones include four main types that are located in different layers of rock:

The rarest and most expensive are «koma nagura» stones, which contain the finest grains and a homogeneous structure. They are used for superfinishing of both dangerous razors and knives, as well as samurai swords.  Then, in order of increasing the coarseness of the grains, come «medjiro nagura,» which are used to create a slurry on water stones for the primary sharpening stage. Such stones often have pronounced layers of yellow. «Botan nagura» is suitable for rough sharpening. 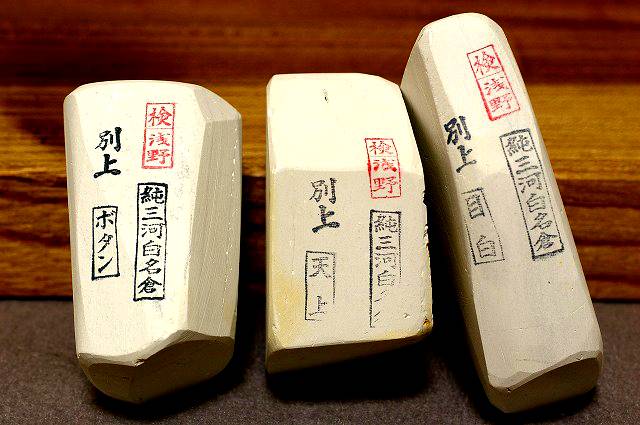 Each layer of rock, in turn, has layers of different quality, which are divided into four varieties according to the degree of homogeneity of the structure, according to traditional Japanese quality criteria:

Technically, when working with nagura, it is the suspension that removes the metal, not the abrasive surface of the stone on which it is applied. The suspension consists of freely rolling grains, which break down and become smaller during sharpening, thus moving to a finer operating mode. This allows nagura to be used in conjunction with a wide range of different stones. The speed of the nagura depends on the color of the stone. White stones are faster and more aggressive, while the striped ones are softer, and the price of the first ones is a bit higher. The shape of the stone also determines the price. Square and rectangular stones are more expensive than those that are not in the regular shape. One should not forget that any nagura stone works very economically, and a small size stone will last for many years. 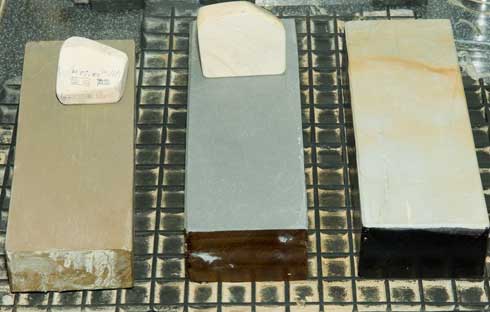 The main functions of the nagura:

1. Creating slurry on water stones. After soaking the stone, several motions are made over it with nagura. Their number depends on the desired quality of the slurry, its density and quantity.

2. The most important quality of the slurry of nagura is the even distribution of water inside, and most importantly, its retention. When sharpening by hand, even when the blade is pressed hard, the slurry is not squeezed upward, but remains on the surface of the stone.

3. Water stone, with the slurry induced on the surface, acquires an increased uniformity of the plane and its grains are produced evenly along its entire length. The use of nagura allows you to level the stones less frequently. In addition, the sharpening speed increases due to the uniformity and smoothness of the blade movement along the plane.

Original nagura stones are in great demand, and in order to protect genuine stones from fakes, the producers put several stamps on them. The lower right stamp indicates the authenticity of the stone, the lower left indicates the name of the layer from which the stone was mined, and the upper left indicates the grading according to quality standards. 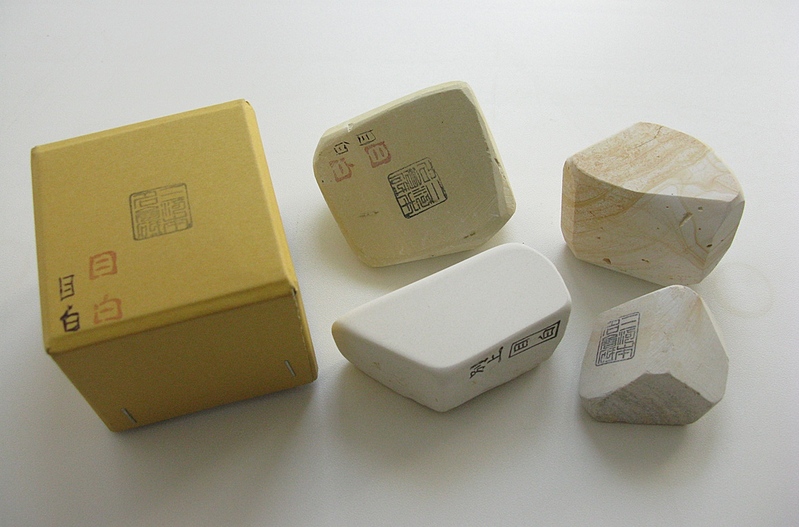 It is believed that nagura has unique properties and cannot be replaced neither by synthetic analogues nor by other stones, in particular soft sandstones. However, there are a large number of other Japanese stones that are also used for slurry, and they are also commonly referred to by the generalized term "nagura". For example, "nagura tsushima" or such stones as suita, umegahata and others.