What Is The Purpose Of The Microbevel. Its Functions And Creation Methods.

One of the best known and most proven methods of improving the cutting edge resistance during sharpening is the creation of a microbevel or secondary bevel (小刃 [ こば ] in Japanese). A micro-bevel is the formation of an additional bevel with a larger sharpening angle on a bevel already created at a certain angle. 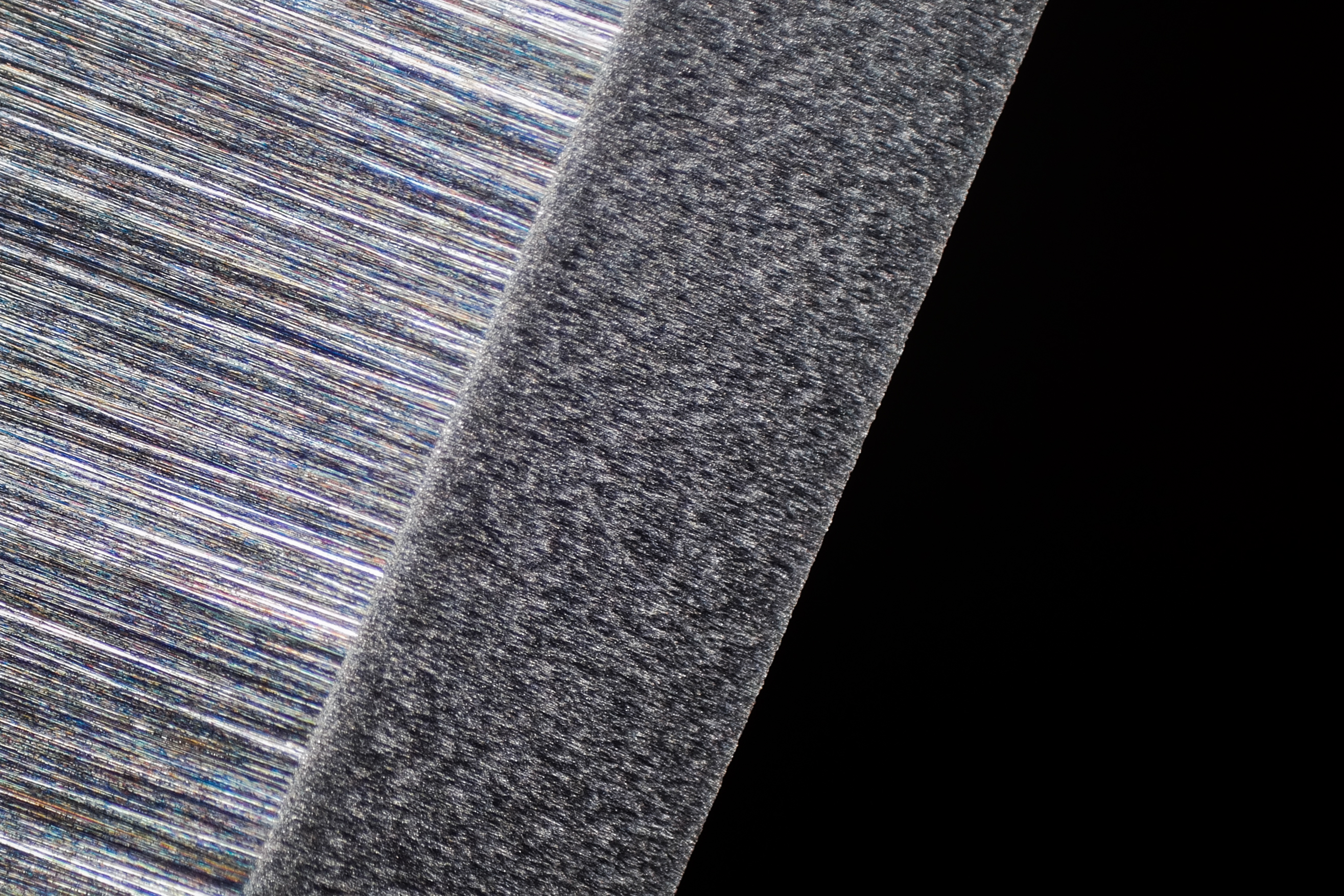 Among modern sharpeners, the creation of a micro-bevel is one of the most controversial and debatable ways of finishing a blade. There is an opinion that a high-quality processing of the bevel with a full set of abrasives, from the coarsest roughing to the finest finishing, and even with the use of various polishing pastes, makes the creation of a micro-bevel pointless. However, this approach only works well if the result of sharpening is a smooth, defect-free surface on steel with an even distribution of sufficiently fine carbides. This is usually the case with modern powder steel. It is on powder steels "HSS", which can withstand high cutting edge loads at small sharpening angles, that the creation of a micro-bevel is the most debatable solution. The quality of finishing the bevel, with the removal of sharpening scratches and burr from the cutting edge, is the most important factor of a good sharpening of such a knife. This is often sufficient to obtain maximum wear resistance characteristics. 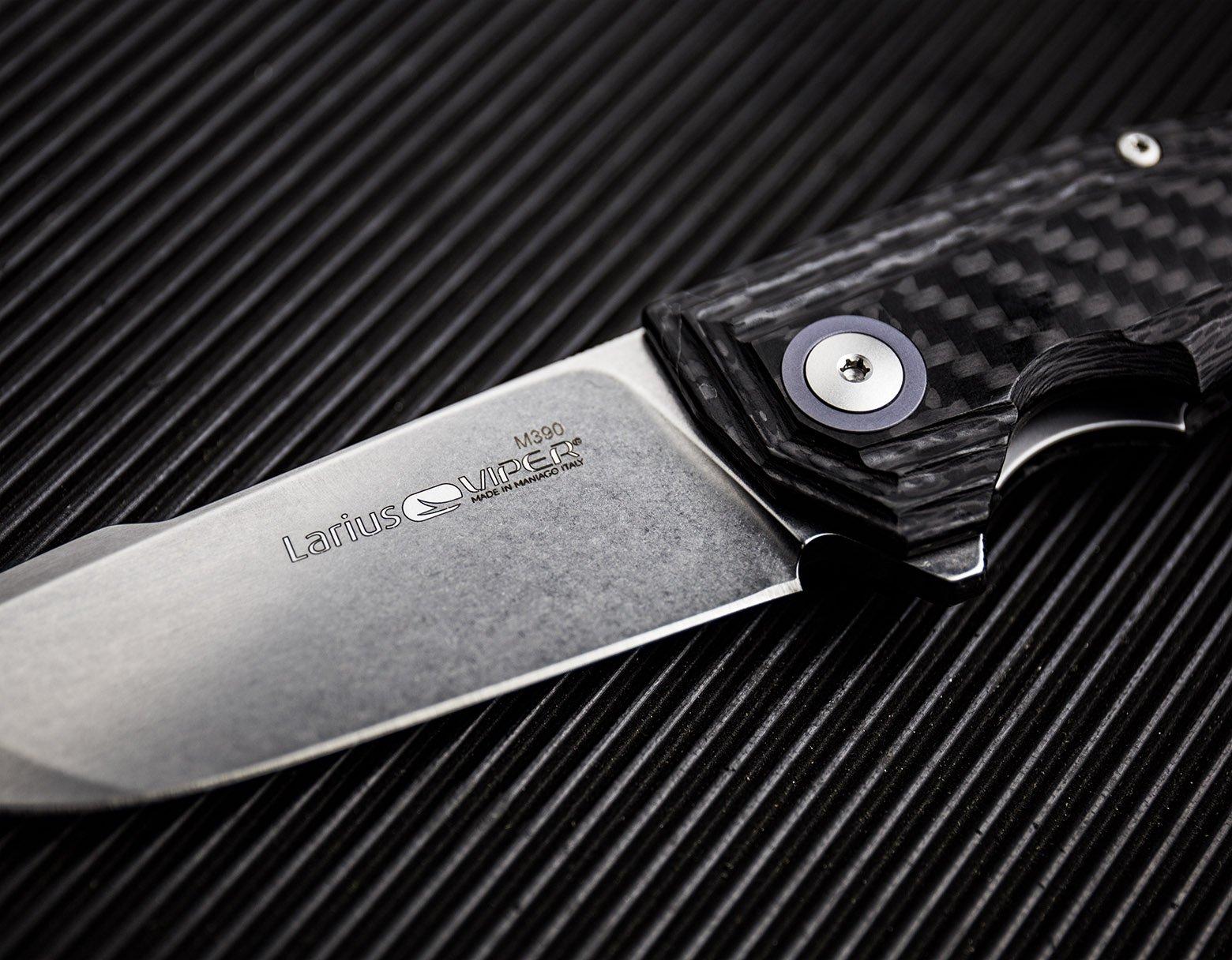 In the case of stainless steel with a hardness of 54-56 HRC on a kitchen knife with a thickness behind the edge not exceeding 0.5 mm, sharpening at small angles (from 12° to 18° per side) can lead to its rapid blunting. The cutting edge on such steel has little rigidity at low angles and begins to deform during operation, sagging sideways. At the same time, kitchen knives do not show good cutting qualities at large sharpening angles (more than 20° per side). Obtaining the most lasting sharpness of the cutting edge at the smallest possible angles is therefore the main purpose of the micro-bevel. The blade, sharpened at 30 total degrees, firstly penetrates into the material at a rather large angle of the micro-bevel, which greatly protects the cutting edge from damage. Width of micro-bevel is usually a few tenths of a millimetre - this does not spoil the aesthetic appearance of the knife, creating only a thin, shiny line on the blade. 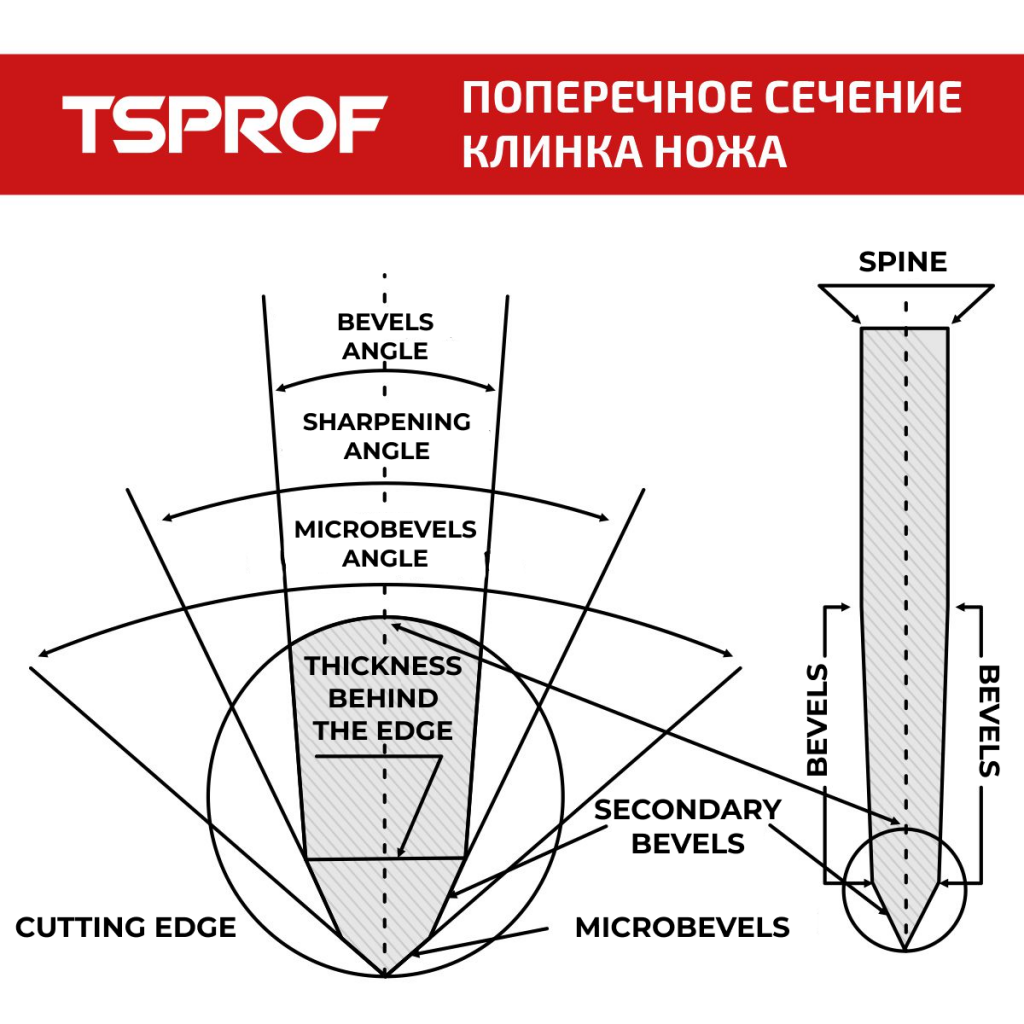 It is often believed that the micro-bevel can be effectively replaced by using the step sharpening method, in which a slight increase in angle (by 0.1° to 0.2°) occurs during the change of abrasive to a finer one. However, this method does not result in a final increase in angle, but only in a better deburring and time-saving.

The microbevel has the following purposes:

- Proper deburring in cases when the steel is defective and difficult to sharpen.

- Preventing chipping of the cutting edge for sufficiently hard steels with coarse carbides.

The angle of micro-bevel correlates directly with these objectives. To reinforce the cutting edge on kitchen knives, it should be large and in this case it corresponds to the optimum standard: 30° total angle of the bevel and 40° total angle of the micro-bevel. However, if the function of micro-bevel is to reinforce steels that have coarse carbides and are prone to pitting, but have a sharpening angle of a large degree (e.g. 40°), then the micro-bevel can be around 1-2°. The appropriate equipment is needed to form such a fine micro-bevel. The rotary knife sharpeners with rack and pinion lifts such as the K03 and the Kadet Pro make it possible to create microbevels at any angle and almost on any kind of knives: kitchen knives, folding knives, hunting knives, etc., as quickly and comfortably as possible. 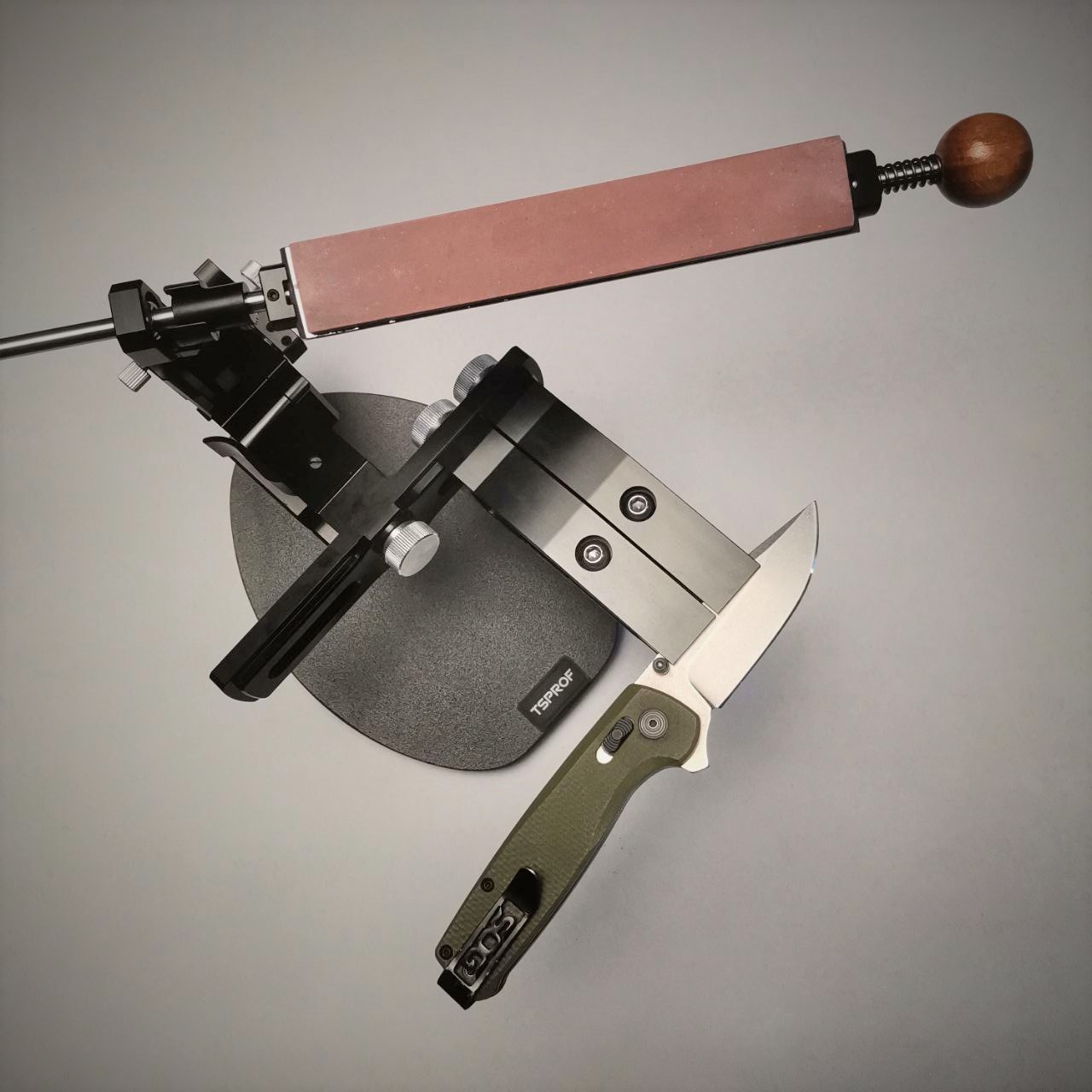 Traditionally micro-bevel is created with natural stones. For this purpose solid natural oil abrasives are used, which do not produce slurry, first of all they are microquartzite: Arcansas Translucent, Arcansas Black, as well as one of the best russian Baikalite-microquartzite stones. For this purpose you can also use belorechit (белоречит) and technical jasper (техническая яшма). All these stones have a grit structure with the highest density. The abrasives should, of course, be well finished, as the performance of natural stones depends to a large extent on the quality of finishing. It is also possible to use hard ceramics (e.g. ruby) for this purpose, which do not form a large quantity of slurry. The absence of free rolling abrasive grains allows a high degree of homogeneity to be achieved when finishing the secondary bevel. However, a good micro-bevel can also be achieved with other natural stones, including slates. Everything depends on the sharpener's preferences, personal technique and sharpening technique. A micro-bevel with natural stones is formed very quickly, usually a few dozens of movements with minimum pressure is sufficient. 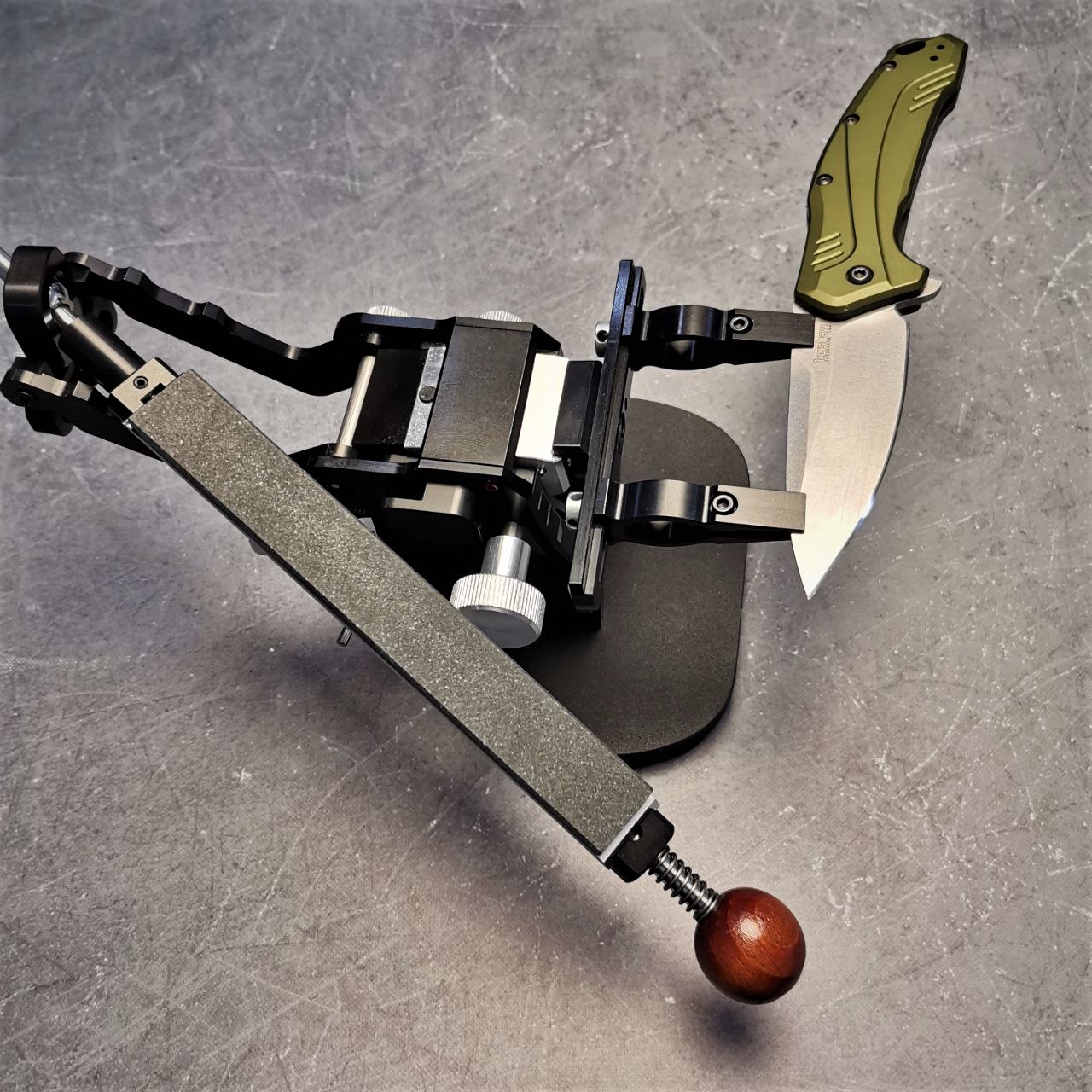 Before creating the micro-bevel, the knife should already be well sharpened, including removing as much burr as possible and finishing with the finishing stone. Once the micro-bevel has been formed, it can also be polished further, especially if ceramics were used instead of a natural stone. Or if a soft natural stone was used to form the micro-bevel, a finer and harder stone can be used for additional polishing.

Microbevel, as a finishing stage in sharpening, increases the wear resistance of soft steel, removes burrs or hardens metal that is prone to pitting. Its use in the finishing of the blade is a sign of the sharpener's increasing skill, as it requires knowledge and established skills. A lot of experimentation needs to be done with different abrasives and steels in order to find your own individual approach when creating a microbevel. And hence your own style of work.